Taoiseach got 100% tracker mortgage for 40 years

Varadkar dismisses suggestions he got help from parents to pay deposit

Taoiseach Leo Varadkar has said that people have to work abroad or get money from parents, as he did, to find a deposit for a house. Video: Oireachtas TV 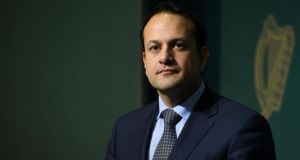 “Sometimes people go abroad and earn money. Others get money from their parents. Lots of us did,” Taoiseach Leo Varadkar told the Dáil on Tuesday

Taoiseach Leo Varadkar has said he got a 100 per cent mortgage for 40 years with a tracker interest rate and did not get financial help from his parents for the deposit to buy his home.

In the Dáil on Tuesday, in response to a question about people needing large deposits to buy a house, Mr Varadkar said: “Sometimes people go abroad and earn money. Others get money from their parents. Lots of us did.”

He faced sharp criticism over his comments that people could get help with their deposits from their parents.

Mr Varadkar on Wednesday said he did not get help from his parents to get his deposit.

“As it happens, I didn’t get any help with my deposit when I bought my home. I didn’t need it as I got a 40-year 100 per cent mortgage from the bank. Of course, I was delighted at the time. But it was bad policy – all that did was drive up house prices more and more and saddle young people with debt and negative equity,” he told journal.ie

In May 2016, Mr Varadkar told the Dáil he had a tracker mortgage and was paying interest at a rate of 1.1 per cent.

He also said others in his peer group, “including friends and family who bought at the same time at a standard variable rate”, were paying a much higher interest rate.

He told TDs at the time he was very conscious of being “one of the lucky ones with a tracker mortgage, whose interest rate is now approximately 1.1 per cent”.

Mr Varadkar’s comments on parental help were made in reply to Labour leader Brendan Howlin, who said it would be a “hopeless task” for people renting at exorbitant rates to be able to raise a deposit of €20,000 or €25,000.

Mr Howlin was speaking in the context of the Government’s plan for local authorities to offer secure low-interest mortgages for up to 30 years.

The Taoiseach said that “it has always been the case that a person needs to raise a deposit to buy a house. People do it in many different ways.”

Mr Varadkar told Mr Howlin it was always the case that “a person had to be able to raise a deposit to their own home with the exception of one period during the boom when we had 100 per cent loans”.

“I would not like us to get back to 100 per cent loans because we know where that led us.”