Varadkar congratulates McDonald, but says SF not fit for office 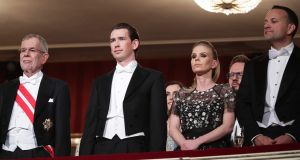 Austrian president Alexander Van der Bellen, Austrian chancellor Sebastian Kurz and his partner Susanne Thier and ITaoiseach Leo Varadkar stand prior the opening of the Opera Ball 2018, the sumptuous highlight of the Austrian capital’s ball season, on February 8th, 2018 at the State Opera House in Vienna. Photograph: Georg Hochmuth/AFP/Getty Images

Taoiseach Leo Varadkar has said the gulf between Fine Gael and Sinn Féin remains too wide for them to to go into coalition together.

Mr Varadkar congratulated Mary Lou McDonald on becoming president of Sinn Féin but said he could not foresee going into government with the party.

“A someone who leads my party, I know the enormous sense of pride that comes with being able to led the party you have worked for, for 10 or twenty years and I know how proud her family must be of her,” said Mr Varadkar.

“She is also the third woman to lead a political party in Ireland and that’s an achievement in its own right so I wish her well but not too well, needless to say in her new role but it’s not going to change the relationship between Sinn Féin and Fine Gael and make them any more acceptable as a coalition partner really because we’re so different.”

He said: “We’re a pro-European party, they’re Eurosceptic or ‘Eurocritical’, as they prefer to say, but it amounts to the same thing. We’re a party that’s pro-business and believes in lower taxes on middle income people and they don’t believe in that. We’re a party that is globalist and internationalist and sees Ireland as a country that’s at the centre of the world, whereas Sinn Féin is nationalistic and sometimes even sectarian. “I don’t see how the relationship between the two parties will change but certainly on a personal level, I want to congratulate her.”

Asked if Ms McDonald distancing Sinn Féin from its violent past would make them a potential coalition partner, he said the party is “not fit for office.”

“No, is the short answer in that our differences are really wide on policy. The reason why I couldn’t see Sinn Féin and Fine Gael going into office is because of Sinn Féin’s plan for the future; not just Sinn Féin’s past. We also have to remember about the recent past,” he said.

“Ireland has an economy that is recovering and has expanded again, there are more than two million people at work, incomes are rising, unemployment is falling and Sinn Féin in the past have opposed every single one of the policies that was necessary to get the country back on track,” he said.

“Having said that it would be welcome if the new president of Sinn Féin was to bring about a clean break with the past and the ongoing celebration of violence with commemorations and so on,” he said,

Mr Varadkar said he wished to continue the confidence and supply agreement with Fianna Fáil.

“I haven’t spoken to Micheál Martin about the extension of the confidence and supply agreement so he will be the first person that I will speak to about it when that point comes,” he said.

“The view I have expressed the view this arrangement would last for three years and three budgets. I always said we would honour it and we have. I wouldn’t like it to just suddenly end on the night of the Budget in October. There are lots of important events ahead - Brexit is happening in March 2019, we have European and local elections a few months after and lots of issues ahead of us.”

Mr Varadkar said he would not call for a general election despite a recent Irish Times Ipsos/MRBIpoll which saw his approval rating rise to 60 per cent.

“Enda Kenny gave me lots of advice when I came into office and he said he would be very wary of opinion polls. Whatever happens, never take out the revolver or the champagne at the result of an opinion poll, so I’m very conscious that opinion polls go up and down and it wouldn’t be my instinct or policy to seek a general election for opportunistic reasons just because of the way the polls are going,” he said.

“I’m not planning a general election in 2018 but it something that is not entirely under my control.”