Use of Eircode system ‘not compulsory’, Alex White says

Minister Alex White launches Eircode, Ireland's new postcode system. At a protest outside the launch Conradh na Gaeilge claim that up to 50,000 placenames are inaccurate or missing. Video: Bryan O'Brien 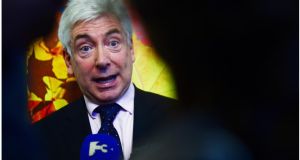 The use of postcodes provided under the new Eircode system will not be compulsory, Minister for Communications Alex White has said. Photograph: Bryan O’Brien/The Irish Times.

The use of postcodes provided under the new Eircode system will not be compulsory despite costing €27 million to introduce, Minister for Communications Alex White has said.

The Eircode system will give every house in the country a unique postcode.

On the first day of operation, there were a number of reported problems with the website including stating Shannon Airport is in Co Limerick.

However, Mr White said this was an efficient system that needed space to be implemented.

“We cannot expect to have the entire system finalised on day one.”

The Irish Fire and Emergency Services Association have raised serious concern about it. The Freight Transportation Association and DHL have said they will not use the system.

The Eircode system will not work with SatNavs or Google Maps and up to 50,000 Irish place names are inaccurate or missing, according to Conradh na Gaeilge .

Mr White said he was confident the companies would use it once they see the benefits of it in action.

“I believe many transport and logistical companies will come on board for example when they see their competitors using it, when they see the value associated with it in terms of doing business efficiently.

“This is day one. I remember when we were building roads, link roads and tunnels I remember freight companies saying they weren’t going to use the bypasses or tunnels, they did in the end because businesses want to ensure they do their business efficiently.”

Eircode will now begin issuing letters to every house in the country advising them of their new postcode.

Each code will be seven digits with the first three referencing an area while the other four digits correspond to a particular address.

It is an optional process although it may be requested by some emergency services or online shops.

Mr White said there will be no changes made to the system and insisted there should be no confusion about the process.

Fianna Fail TD Michael Moynihan said it was an unworkable and expensive system.

“We are now in a situation where €27 million has been spent on the new system to date and as it stands, it is largely unusable.”

Sinn Féin TD Michael Colreavy said there are far too many teething problems with the system – € 27 million is a lot of money to spend on a system that might not work.”

Mr White insisted it was “more than worth” the money that was being spent.

“It is more than worth it. People will see that it is worth it when we see the benefit of it emerging in the coming weeks and months.