US politicians warn about Assembly

Belfast killing should not be used to damage institutions, says Congressman 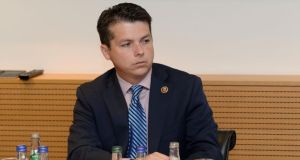 US Democratic Congressman Brendan Boyle: ‘There is absolutely no appetite in the United States for any sort of backsliding on the democratic institutions that exist and that a lot of sacrifice and effort went into creating.’ Photograph: Eric Luke

A leader of the Friends of Ireland caucus in the US Congress has said the killing of Belfast republican Kevin McGuigan should not be used as a reason to collapse the Northern Ireland institutions.

Congressman Richard Neal, a Massachusetts Democrat, said yesterday any arguments about the fallout from the murder of Mr McGuigan should take place within the Stormont institutions.

Taoiseach Enda Kenny and British prime minister David Cameron have convened talks between Northern Ireland parties to try and break the political impasse sparked by the assessment by Police Service of Northern Ireland Chief Constable George Hamilton that the IRA remains in existence.

The PSNI’s belief that former IRA members were involved in Mr McGuigan’s death, although without the sanction of the IRA leadership, has triggered a crisis threatening the Northern Executive and Assembly.

The talks next week will focus on “confidence issues arising from the legacy of paramilitarism” as well as the implementation of the Stormont House Agreement, which proposed contentious reductions in the social welfare budget.

Mr Neal, who was in Dublin as part of a Global Irish Parliamentarians delegation, said the Belfast Agreement, which established the institutions, is the “way forward”.

“It’s in the crucible of the institutions that we found representative democracy. That’s where you sort your differences. America is one of the guarantors of the Good Friday agreement. In this instance here you run the risk that if the institutions were to collapse then what you do is go back to an election where the result is likely to be the same and then you have stalemate,” he said.

He added: “I don’t know that you want to take an isolated murder where all have agreed that it was not sanctioned by any political leadership and use that as an example of failure, because it is not.

“I have challenged criminality and threats to the peace and political processes no matter what quarter it originates from and will continue to do so. We want to achieve the full implementation of the Stormont House Agreement and on the issues of welfare protections, parading and identity, and to address the legacy of all groups who were party to the conflict, including state forces,” he said.

“We have also been clear that the biggest threat to the stability of the political institutions remains the ongoing Tory austerity cuts to the Executive’s budget which is impacting on our ability to deliver frontline public services.”

Pennsylvania Democratic Congressman Brendan Boyle was also in Dublin and said: “There is absolutely no appetite in the United States for any sort of backsliding on the democratic institutions that exist and that a lot of sacrifice and effort went into creating.”

Mr Kenny said it was “absolutely critical” the discussions next week were “advanced with a sense of urgency and that all of the parties constructively seize this opportunity”.