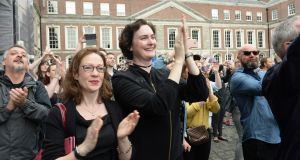 Celebrations erupt at Dublin Castle as results in the referendum on the Thirty-Sixth Amendment of the Constitution Bill 2018 (Repeal of Eighth Amendment) are announced. Photograph: Dara Mac Dónaill/The Irish Times

The country has voted to remove the constitutional ban on abortion by a two-thirds majority.

Thirty-five years after it was placed into the Constitution, the electorate voted for the Eighth Amendment to be repealed and for provision be made for the regulation of termination of pregnancy. See here for liveblog updates on Saturday on developments as count results on the resounding result became clear across the State.

Every constituency except Donegal, which voted in favour of retaining the Eighth Amendment by 51. 87 to 48.13, passed the referendum by a clear mandate.

There were joyous and tearful scenes in Dublin Castle as the results were announced just after 6pm, showing 66 per cent of the electorate had supported the proposition.

Minister for Health Simon Harris, who led the Government’s campaign, said it was a historic day for the country and for the women of Ireland.

It was a clear message to those who had suffered at the hands of the Eighth Amendment that the country supported them and wanted to care for them, Mr Harris added.

Over 2.15 million people cast their vote in the referendum. Some 6,042 people spoiled their vote. About 1.42 million people backed repeal of the Eighth, while 723, 632 voted in favour of retaining the amendment, also known as Article 40.3.3 of the Constitution.

Mr Martin said the outcome signalled the “dawn of a new era” and had to be respected by the Oireachtas.

The focus has now shifted to the passage of legislation, and the question of whether TDs and Senators who have opposed repealing the Eighth Amendment would now seek to block the legislation.

The Fianna Fáil party would not stand in the way of implementing the people’s decision, Mr Martin insisted.

And we say that we trust women and we respect women and their decisions. For me it is also the day when we said, ‘No more’

The Cabinet will on Tuesday consider a request from the Minister for Health to draft the Heads of a Bill to implement the decision of the people.

Mr Harris said he expected it be published by the summer recess and passed by the end of the year.

There is a strong mandate to implement the decision of the people as soon as possible, the Minister added.

The legislation will need to be accompanied by discussions with the medical representative groups on how abortion services will be provided in this country.

Terminations will be made accessible within the first 12 weeks of pregnancy and beyond that when there is a risk to the mother’s life or of serious harm to her health.

The result was clear from early on in the day, but it was not officially declared until early Saturday evening.

It was met with widespread applause from the thousands of people who had gathered in Dublin Castle to witness this historic moment.

Taoiseach Leo Varadkar said a quiet revolution had taken place in a great act of democracy.

“A hundred years since women got the right to vote, today, we as a people have spoken. And we say that we trust women and we respect women and their decisions. For me it is also the day when we said, ‘No more’.”

Together For Yes co-ordinator Orla O’Connor said they had felt a strong response on the doors but did not dare to believe it could happen.

Dr Peter Boylan, chair of the Institute of Obstetricians and Gynaecologists, described it as a watershed moment for the country.

Those who opposed the referendum said they accepted the will of the people but expressed disappointment at the outcome.

Independent Senator Ronán Mullen said Ireland has lost “something very beautiful” with the removal of the Eighth Amendment.

Mr Mullen said “a lot of unborn children will lose their lives in future – that is what happens when abortion gets legalised”.

“I would ask people to keep those children in their thoughts and prayers today, and their mothers, and those involved in their lives.”