US governor urges Government not to use plain tobacco packaging

North Carolina governor writes to Irish ambassador to US, saying it would be like US stripping Guinness or Baileys of their brand names 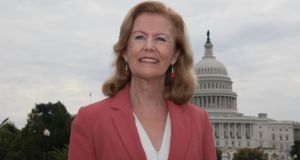 The Irish Ambassador to the US Anne Anderson: she has written to Pat McCrory to acknowledge receipt of his letter and has forwarded his correspondence to Ireland. Photograph: Marty Katz/washingtonphotographer.com

The governor of North Carolina Pat McCrory is the latest American politician to call on the Government to scrap its plans to introduce plain packaging on cigarettes and other tobacco products.

Mr McCrory complained about the proposals in a letter to the Irish Ambassador to the United States Anne Anderson earlier this month, claiming that the move would be like the US stripping Guinness, Jameson and Baileys of their famous brand names. There was “little evidence that plain packaging measures are anything more than symbolism”, he said in his September 10th letter.

The Republican politician told Ms Anderson that, as a governor of North Carolina, a major tobacco-growing and cigarette-making state, he was “sensitive” to legislation in the US and abroad that threatened the livelihood of farmers, manufacturers and businesses.

North Carolina is home to the second-largest tobacco firm in the US, RJ Reynolds Tobacco Company, makers of America’s most popular cigarette, Camel. The state is also home to other manufacturers, Lorillard, owner of the Newport and Maverick brands, and Liggett. The three companies are among the top five employers in the state.

The governor said the Government’s plans threatened to “divert attention and resources from more effective actions that could achieve Ireland’s greater goal of being smoke-free during the next decade”.

Plain-packaging laws were “a direct assault” on intellectual property and trademark rights, which Ireland had defended since the Trade Marks Registration Act of 1875, and would erode rights protections worldwide and empower critics to “take aim” at similar products, he said.

“Imagine if the United States required Guinness to be stripped of its universally recognised brand and be marketed solely as ‘beer’ or Jameson to be labelled simply as ‘whiskey’ and Baileys as ‘liqueur’,” said the governor, the first Republican to hold the office since 1988.

“These outstanding Irish companies would be outraged and would argue that the quality and distinction of their products, as conveyed through their brand packaging, were being stolen – and they would be right.”

He respected the Government’s “sovereign prerogative to govern”, he said, but asked that “North Carolina’s serious concerns” be conveyed by the ambassador to Dublin. He encouraged the Government to seek “alternative and more effectual means of achieving your nation’s laudable public health goals”.

A spokesman for the Irish Embassy in Washington said that Ms Anderson wrote to Mr McCrory to acknowledge receipt of his letter and had forwarded his correspondence to Ireland.

The first-term governor joins fellow Republican congressman Bob Goodlatte of Virginia, another big tobacco state, and the state’s former governor Bob McDonnell – along with the US Chamber of Commerce – in writing to the ambassador objecting to the plain-packaging plan. Mr McDonnell was convicted of public corruption earlier this month for accepting $165,000 in gifts and loans from the owner of a dietary supplements company in exchange for promoting his products.

Ireland would be the first European Union country to introduce plain-packaging legislation. Last week, Italy became the ninth EU state to object to the anti-smoking packaging, joining Bulgaria, the Czech Republic, Greece, Poland, Portugal, Romania, Slovakia and Spain. Under the proposals, the Government would force cigarette manufacturers to publish graphic warnings on packages and ban the use of terms such as “low tar”.