Urban voter turnout at more than 40% in many areas

Emigrants are returning to Ireland today specifically to vote in the Referendum. Some have been travelling for well over 12 hours only to return again in 24. 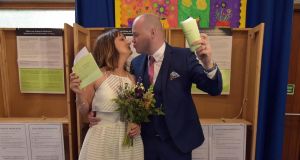 Newly-married couple Anne Fox (nee Cole) and Vincent Fox cast their votes in Dublin in the referendum on their wedding day. Photograph: Getty 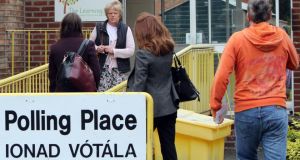 Members of the public arrive to vote at a polling station in Drumcondra, north Dublin on May 22nd, 2015. Photograph: Paul Faith/AFP/Getty Images 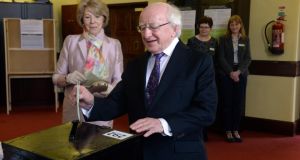 Turnout in the first national referendum to legalise same-sex marriage and on the age of candidates for the presidency has been reported at more than 40 per cent in many urban areas by teatime.

Ireland is the first country in the world where the electorate is voting on whether to legalise gay marriage, and in Dublin overall turnout is expected to hit 60 per cent by the end of polling, similar to the turnout for the divorce referendum in 1995 and well above turnouts for the Seanad referendum last year which were below 40 per cent.

Other urban areas including the cities of Cork and Galway are expected to have close to the same turnout as Dublin.

The highest turnout in any Irish referendum was 70.6 per cent in 1972, on whether to join the EEC.

Lower turnouts in rural areas are likely to bring the national percentage down, but polling stations expect a surge of voters casting their ballot after work in the final few hours before polls close at 10 pm.

In both Cork city and county, turnout appears to be high with most polling stations reporting that turnout is set to at least match if not exceed the last referendum on the abolition of the Senate.

In rural Bartlemy near Fermoy in Cork East, turnout at 7pm was hitting 45 per cent, which was higher than usual, with another notable feature being a high turnout of young voters.

Around Bandon in Cork South West, voting has been brisk all day and higher than is usual for a referendum, with some polling stations reporting turnouts similar to those of a general election.

In Clonakilty also in Cork South West, a similar pattern was emerging with some booths in Clonakilty town reporting a turnout of 32 per cent by 5pm while in Lisavaird outside the town it was at 41 per cent by 7pm.

Back in the city, in Blackpool in Cork North Central, turnout was also strong with 40 per cent votin by 7pm, with a good mixture of voters but in particular older voters.

In nearby Mayfield, voter turnout was averaging 46 per cent at 7pm, even though some boxes had reached 52 per cent, and while there more younger voters coming out, it wasn’t notable as a very strong trend.

By 5.30pm, some polling stations in Dublin and Galway were reporting turnouts of over 40 per cent.

Rural areas in Clare, Waterford and Kerry were slower, with maximum turnout of 30 per cent reported by teatime.

In Co Mayo and Co Donegal estimates were at 30 per cent, with a similar level reported in most Co Leitrim stations. In Co Louth, turnout had hit the 40 per cent mark by 6pm.

Urban areas of Sligo were reporting close to 40 per cent turnout an hour earlier. In Carlow-Kilkenny, where there is also a byelection to replace EU Commissioner Phil Hogan, turnout was higher than for the Seanad election and close to general election levels.

In the Stoneybatter area of Dublin at Oxmanstown Road and Manor Street, polling station officials said they had queues of up to 20 people waiting to vote when the centres opened at 7am.

In Clontarf at about 11am, voters were also queuing for their ballot papers.

Parts of Tallaght reported 35 per cent turnout, while in the Dún Laoghaire it was closer to 42 per cent.

Dublin North Central, one of the constituencies consistently in the top three for turnout at all elections and referendums, was hitting close to 45 per cent in some polling stations.

Earlier in the day, forecasts for turnout in city areas were high.

In Sandymount on the capital’s southside around 12 noon, an estimated 20 per cent of the electorate had voted, mixed in age but predominantly older voters in the Dublin South East constituency.

In Darndale on the city’s northside, polling was quiet in the Dublin North Central constituency.

In Castletownbere in Cork South West, voting was described as a little bit better than in previous referendums but not as high as in the general election.

The rural town, with some 1,200 voters, has a large number of expatriate residents who are ineligible to vote because they are not citizens.

Returning officers expect voting to increase significantly around teatime with most people in employment expected to vote between 7pm and 10pm when polling finishes.

All Irish citizens aged 18 or over are entitled to vote, but only if their names are on the electoral register.

There were 3.14 million names on the register when the date for the referendums was fixed, but 66,000 voters applied to have their names on the supplementary register before the deadline of May 5th.

In the marriage referendum, people may vote Yes or No to the proposal to include a new clause about marriage in the Constitution.

This new clause provides that two people may marry each other regardless of their sex.

Voters are being given a green ballot paper for the age of presidential candidates referendum.

In this referendum, people may vote Yes or No to the proposal to reduce the age at which candidates are eligible for election to the office of President from 35 to 21.

Voters cast their ballot by putting an X mark in the box to indicate whether they wish to vote Yes or No to the amendments.

Voters should bring their polling cards with them, but may still vote if they do not have them as long as they can prove their identity.

A number of documents that will be accepted as evidence of identity are listed on polling cards and on posters displayed at polling stations.

Alternatively any of the following accompanied by a further document that establishes the address of the holder in the constituency or local electoral area can be used: (viii) a cheque book; (ix) a cheque card; (x) a credit card; (xi) a birth certificate; (xii) a marriage certificate.

The Referendum Commission has called on all voters to use their votes in both referendums.

Voting is also taking place in the Carlow-Kilkenny byelection.

There are 13 candidates for the vacancy created by the departure of Fine Gael TD Phil Hogan to take up the post of EU commissioner.

‘I’ve yet to meet a homeless woman who hasn’t been raped’: Campaigners seek to establish refuge for those assaulted on streets 10:15
Snow for many areas as yellow weather alert in place for entire country 09:58
Badge of distinction: Meet the first Sikh in the Garda Reserves 10:45
Juvenile to appear in court over serious assault on woman in Dublin city 08:13
Pandemic provides golden opportunity for planners to reshape towns and cities 06:00