Setting of fees not the responsibility of Government, universities body argues 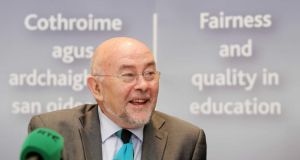 Minister for Education Ruairí Quinn. The Department of Education said there was “no additional cost to the exchequer” as a result of the decision in relation to university fees paid by emigrants. Photograph: Sam Boal/Photocall

However, the proposal was given a warmer welcome by the institutes of technology, even though they also warned of possible “unintended consequences”.

Minister for Education Ruairí Quinn announced the move earlier this week. It is aimed primarily at children of Irish emigrants, though other EU citizens will also benefit.

The international fees for non-EU students range from €8,000 to more than €20,000 per academic year, depending on the course and the institution. The average level of fees is well over €10,000.

Until now, children of people who emigrated to places such as the United States, Canada and Australia had to pay the international fees but these will now fall into line with the €2,500 annual contribution paid by Irish and other EU students.


‘No additional cost’
The Department of Education said there was “no additional cost to the exchequer as a result of this decision”. It also said the impact would “not be large” since only about 120 non-EU students currently pay the higher rates.

While the department said the position “will be kept under review and the progress of this initiative will be monitored”, the Irish Universities Association (IUA) said numbers will inevitably increase as the price drops.

IUA chief executive Ned Costello said the setting of fees was not a matter for Mr Quinn or the Government.

“Under section 40 of the Universities Act it is a matter for the universities themselves. The Minister’s proposal will have to be examined. There are questions about its implementation and feasibility in terms of revenue forgone by the universities, which are already under financial pressure,” he said.


‘Unquantifiable’ cost
He also said the cost involved would be “unquantifiable” since the number of non-EU students would increase if the cost dropped.

“If you reduce the fees, the numbers will go up,” he said.

Gerry Murray of the Institutes of Technology Ireland also said the number of students from outside the EU would increase, adding that anecdotal evidence suggested a high level of inquiries from emigrants about sending their children to Irish institutions.

He said the current system is unfair and tentatively welcomed the move.

“We need to look at it in terms of how much people take advantage of it,” said Mr Murray, adding it could have “unintended consequences”.

The Union of Students in Ireland (USI) welcomed Mr Quinn’s announcement, and said it had previously raised the issue with the Minister.

The new arrangement will benefit children who spent at least five years in total in primary or post-primary education in Ireland or the EU, who will now be charged the same as any other EU nationals to study in Ireland.

USI president Joe O’Connor said: “This is merely a stopgap measure and gesture. The ‘push’ factors leading to forced emigration in Ireland now need to be properly addressed, including real investment in tackling the youth unemployment crisis, and an end to the internship culture which has been allowed to develop.”