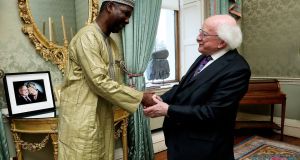 Moves away from multilateralism and towards countries taking action on their own is a worry, the head of the UN General Assembly has said.

Tijjani Muhammad-Bande made the comments during a visit to Dublin in recent days, which saw him meet President Michael D Higgins, Tánaiste Simon Coveney and others.

Mr Muhammad-Bande was elected as president of the UN General Assembly last June ahead of its 74th session. which began last September. He holds the office for one year.

He is the second Nigerian president of the 193-member policy-making General Assembly and his priorities for his year in office include climate change, universal health coverage, gender equality and the eradication of poverty and hunger.

The 61-year-old career diplomat, in an interview with The Irish Times, said he and Mr Higgins spoke about the need to work collectively.

“More broadly he spoke about systemic and structural issues that stand in the way of justice in the world and the place of morality politics,” he said of Mr Higgins.

“His whole approach is the way in which all countries, especially smaller countries, have contributed to world peace and continue [to] play very important roles.”

On the State’s campaign to win a seat on the UN Security Council for 2021-2022, Mr Muhammad-Bande said he has “no doubt it has a good chance”.

The State is competing with Norway and Canada for two of the rotating seats on the 15-member UN Security Council.

“It is an honour for any country to serve in the council, especially if it has broader issues it wants to push on our behalf.

“All countries need, when they are campaigning for seats on the council, to show what they have done in the past and a commitment to do even more to help the United Nations. The United Nations is too important a body for us to be apathetic about [it]. All the countries that are competing are great countries. I take no sides on this matter.”

Mr Muhammad-Bande said there has been a lot of discussion about moves towards unilateralism, but he would not be drawn on the attitude of US president Donald Trump’s administration, which is seen as hostile to multilateral organisations such as the UN.

“I do not want specifically to address this administration, but what I can say . . . [is] we have seen a lot of discussion around the question of a tendency towards unilateral action and a lessening of commitment to the multilateral order,” he said.

“We can have different views as to how this multilateral order can look like and we also have a charter. Whatever our disagreements with implementation we should look at the charter to see our responsibilities as members that have signed onto the charter.”

He said 192 out of 193 UN member countries had addressed the General Assembly in its new session, adding: “You cannot say people are unaware of the centrality of the organisation.

“Are there questions requiring a deeper analysis and solution in relation to current multilateral order that we are missing?

“Yes, we worry over tendencies toward reneging on agreements . . . No one has, to my mind, written to say we are withdrawing from the UN.

“More generally, [there is] even a tendency towards pulling out of general agreements. Again we question why this is so.”

He would not be drawn on Mr Trump’s decision to withdraw the US from the UN Paris climate change agreement.

“As for climate agreement, I mean the effort around the world to remind everyone of the urgency of the matter. I am not doing a countdown and an accounting of commitments made, but all countries have a duty as per the 2015 agreement to do more, and the positive thing is that climate issues have become household issues. Everyone appreciates them, more than had been the case.”