UK official raised concerns over ‘uneven quality of the Garda’ 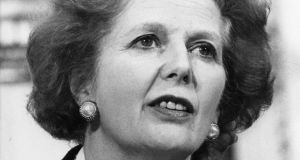 Margaret Thatcher was told co-operation between the Garda and the RUC was “inhibited by political considerations on the Irish side”. Photograph: Pat Langan

A detailed report on security co-operation between Britain and Ireland is included in the newly released London files.

In a memorandum dated May 4th, 1985, the British cabinet secretary Sir Robert Armstrong reported back to prime minister Margaret Thatcher about the issue, which had been raised at recent ministerial meetings in the context of negotiations that were to lead to the Anglo-Irish Agreement.

Armstrong, who was a strong supporter of the agreement, had asked the intelligence co-ordinator for Northern Ireland – a senior agent in the British secret service – “to prepare an interdepartmental assessment of the present state of co-operation between the Irish and British authorities against terrorism”.

Between Dublin and London, co-operation was “close and effective”. The flow of information “between the Intelligence and Security Branch of the Garda on the one hand and the Security Service and the MPSB [Metropolitan Police Special Branch] on the other” was of “crucial importance in the fight against terrorism in mainland Britain”.

Meanwhile, the UK security services provided “appreciable assistance to the Garda in areas where Garda coverage is minimal, such as subversion, Arab terrorism and counter-espionage”.