Names in a dossier of former politicians who allegedly held offshore accounts have been read into the Dál record by Sinn Féin deputy leader Mary Lou McDonald. 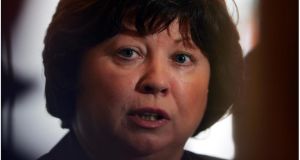 Former minister for enterprise Mary Harney said in 2005 that she asked civil servant Gerry Ryan to end his inquiry into tax evasion in 2004 as it had been running for seven years. Photograph: Bryan O’Brien/The Irish Times.

Ansbacher accounts were funds lodged in Ireland by the Cayman Islands bank, Ansbacher (Cayman) Ltd. They were at the core of an unauthorised financial service run in secret by the late Des Traynor. His system allowed account-holders to lodge money with Guinness & Mahon Bank in College Green, which was then held offshore. The money would be accessed through Mr Traynor in Dublin. They ran from 1971 and the Irish operation was finally wound up in the mid-1990s.

The Ansbacher scheme is first disclosed during the McCracken tribunal, which investigated payments by Ben Dunne/Dunne Stores to former taoiseach Charles Haughey and former minister for communications Michael Lowry.

Gerry Ryan, a chartered accountant who worked in the then Department of Enterprise, Trade and Employment, is asked by then minister Mary Harney to investigate the books and documents of Ansbacher (Cayman) Ltd, Guinness & Mahon (Ireland) Ltd, Irish Intercontinental Bank and Cayman Islands trust company Hamilton Ross Co Ltd.

The High Court appoints inspectors to investigate Irish business conducted by Ansbacher (Cayman) Ltd. Inquiry is headed up by Declan Costello, former attorney general and High Court president. He resigns in November 2000 on grounds of ill health. An inspectors report was completed and submitted to the High Court in June 2002.

Revenue begins investigations into the accounts which have since yielded more than €112 million in unpaid taxes and penalties.

A report identifies 200 holders of Ansbacher accounts, including Mr Haughey and members of the CRH board.

Details of Guinnes & Mahon deposit account in the name of Mr Costello are discovered by Mr Ryan.

Mr Ryan says he was “asked to terminate” his investigations by Ms Harney.

Labour TD Pat Rabbitte asks Ms Harney, then tánaiste, why she directed Mr Ryan to cease his investigation and write up his report when she was leaving the Department of Enterprise the previous year.

Ms Harney says she felt it was time to bring the investigations to a conclusion seven years on and was under the impression they would have concluded much earlier. She says she submitted the Ansbacher report to the Revenue Commissioners, the DPP and other authorities.

She says she did not have the power to seek the appointment of a High Court inspector as those powers went to the new independent Office of Corporate Enforcement when it was established.

Mr Rabbitte asked why, having built her reputation on the investigation into Ansbacher, Ms Harney would want to terminate the inquiry. “It relates to three of the companies where some of the most powerful in our society were engaged in tax evasion that makes (former Minister) Ray Burke’s involvement look like that of a corner shop,” he says. “Why would she want to cut off the investigation of those guys?”

Ms Harney says Mr Rabbitte is “making very serious allegations about my integrity and I would like him to withdraw them…He suggests that I closed down the inquiry because it would reveal some information that I did not like. Deputy Rabbitte had better withdraw that. I have acted properly throughout my career in the Department of Enterprise, Trade and Employment and the issue of bringing that inquiry to an end arose at the start of last year, not a couple of weeks before I left office…He had better have his facts right.”

Mr Ryan approaches then minister for enterprise Micheál Martin asking to be allowed to reopen his investigatons. He says the offer was refused.

Mr Ryan submits a 763-page report to Mr Martin, after being asked by the minister to substantiate his allegations. Mr Martin sought advice from a senior UK-based lawyer and subsequently sent the report to the “Revenue Commissioners, the Garda Bureau of Fraud Investigation, the Office of the Director of Corporate Enforcement and the Moriarty and Mahon tribunals”.

The dossier says an addendum report was submitted in November by Mr Ryan to then minister for enterprise Batt O’Keeffe which was forwarded to gardaí, Revenue and Office of the Director of Corporate Enforcement in early 2011.

Mr Ryan says he made two unsuccessful requests for a meeting with Minister for Enterprise Richard Bruton after the Fine Gael-Labour Coalition took office in March 2011. He says he then wrote to Mr Bruton and Attorney General Máire Whelan to outline the matter to them but received no response.

Mr Ryan says he submitted a witness statement, sought by the Garda Bureau of Fraud Investigation to assist in a possible prosecution, to Minister for Enterprise Richard Bruton through a named assistant secretary, in the department.

Mr Ryan writes to Mr Bruton to complain that he had not forwarded the witness statement to gardaí. Mr Ryan says the statement contained substantial evidence supporting allegations of a conspiracy between a named individual and other persons to defraud the Revenue Commissioners. He also wrote about same to department secretary general John Murphy and Minister of State Seán Sherlock.

Members of the Dáil Public Accounts Committee receive the dossier from serving civil servant Gerry Ryan making allegations of substantial tax evasion over an extended period of time involving, among others, senior politicians. It is thought to be the first such instance under the Protected Disclosures in the Public Interest Act.

The Irish Times publishes an article on the dossier stating that a civil servant was making allegations of substantial tax evasion over an extended period of time involving, among others, senior politicians.

Taoiseach Enda Kenny says the dossier was discussed by the Garda and Moriarty tribunal. Asked if a Minister had seen the dossier, Mr Kenny said there was “a delay in the issue of some documentation because of the retirement of a public servant and pressure of work”.

Sinn Féin deputy leader Mary Lou McDonald calls on Mr Kenny to clarify the contact the Government has had with Mr Ryan regarding the dossier.

Minister for Enterprise Richard Bruton says advice is being taken and promises that a witness statement – taken from Mr Ryan under section 19 of the Companies Act 1990 – on issues relating to the dossier will be forwarded to relevant authorities shortly. He attributes delays to the retirement of key staff in the department.

“This statement relates to wide-ranging and complex matters dating back over many years, and while this work was not completed as quickly as expected due to retirement of key personnel, I am advised that all matters contained in the statement are covered by the documents already submitted to the relevant authorities.”

The family of the late former TD, judge and attorney general Declan Costello - named in the dossier - say he had a Guinness and McMahon account for a short period in the 1970s to receive his share of his father’s estate.

They say Mr Costello did not remember the existence of this account when asked to act as an Inspector in relation to the affairs of Ansbacher Cayman Limited on 22nd September 1999.

Ms Harney says she has nothing to add to her 2005 Dáil statement.

Mr Kenny says the Department of Jobs, Enterprise and Innovation has not been in contact with Attorney General Máire Whelan about the dossier.

“The Attorney General or her office are not authorised to advise in respect of the designated civil servant, because there might be a conflict of interest in advising the department and in advising the minister,” he said.

Mr Kenny says Mr Bruton is to meet Mr Ryan. The Taoiseach says  the witness statement made by Mr Ryan had been cleared by the department and sent to the Garda.

The Public Accounts Committee says it has been told there is no legal basis for it to examine the tax evasion claims.

December 3rd:
Sinn Féin TD Mary Lou McDonald reads the names of politicians alleged to have been in the dossier into the Dail record. She names former Fianna Fail ministers Máire Geoghegan-Quinn, Gerard Collins and Ray MacSharry; former Progressive Democrat and Fianna Fáil minister Des O’Malley; “an S Barrett’’, former Fine Gael minister Richie Ryan as well as “others” whom she did not identify. A number of those identified reject the allegations.