Opinion: ‘He was motivated by a fanatical drive to bring down the twin political and religious establishments in the North: the Ulster Unionist Party and the Presbyterian Church’ 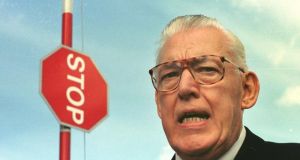 ‘Paisley was probably the finest Irish political demagogue since Daniel O’Connell. He could use his height, enormous voice and captivating oratory to inflame any crowd, just as he could use the same combination to persuade scores of people every Sunday in his Martyrs Memorial Church in East Belfast to confess to their sins and be “born again”.’ Photograph: Bryan O’Brien

There are three keys to Ian Paisley’s extraordinarily long and controversial career in politics and religion in Northern Ireland.

First, for all but a few years at the end of that career he gave a powerful voice – and therefore legitimacy – to a strand of Northern anti-Catholic bigotry and intransigence that, if he hadn’t appeared on the scene, might have started slowly to decline as unionist leaders came to understand that it had little place in the United Kingdom and Europe of the late 20th century.

Second, he was essentially an outsider, motivated by a fanatical drive to bring down the twin political and religious establishments in the North: the Ulster Unionist Party and the Presbyterian Church. He started to appear on unionist platforms as long ago as 1949 – “roaring like a bull”, according to the late Gerry Fitt – to tell unionist working-class voters in north Belfast that they were “voting for their Protestantism” in the face of encircling “Romanist” conspiracies.

It was no coincidence that it was called the Free Presbyterian Church, with no connections to the Baptist tradition from which his father had come and in which he had trained.

He spent most of the 1950s and 1960s attacking the mainstream Presbyterianism – the North’s largest Protestant denomination – for any mild ecumenical tendencies it might harbour.

The extreme mildness of such tendencies didn’t stop him hitting the headlines in a major way for the first time in 1966 for a protest outside the Presbyterian General Assembly in Belfast that provoked a riot.

In the late 1960s and early 1970s, as the civil rights movement emerged and grew, and then the IRA re-appeared, Paisley turned his fire on a succession of unionist prime ministers: Terence O’Neill, James Chichester-Clark and Brian Faulkner.

The slightest hint of compromise with nationalism was met with loyalist rallies whipped up by the kind of ferocious anti-Catholic and anti-nationalist rhetoric – well-laced with biblical references – that was irresistible to many in an increasingly fearful Ulster unionist community. For them he was the right leader at the right time: “In Ulster’s hour of need, God has raised up a man to stand in the gap for God”, in the words of James McClure, one of his earliest lieutenants.

He was the kind of hugely charismatic right-wing preacher-turned-politician of whom the United States has seen plenty but is a rare phenomenon on this side of the Atlantic.

He was the key figure in campaigns to wreck a series of efforts at compromise to end the Northern imbroglio: the 1974 power-sharing executive; the 1985 Anglo-Irish Agreement; and the 1998 Belfast Agreement.

All felt the brunt of his violent rhetoric and mobilisation of the loyalist mob.

He enlisted the support of the loyalist paramilitary groups when he needed them (although they led the way in 1974), but always kept his distance from their murderous excesses.

Then, sometime around 2004, something happened that changed Ian Paisley. People close to Tony Blair reported that he had told the British prime minister he wanted to see peace in Northern Ireland “before he met his maker”.

It may be no coincidence that these reports followed a serious – and maybe life-threatening – illness.

It is not yet clear what caused this change. This observer believes it had something to do with the third key to understanding Ian Paisley: his utter determination one day to be the undisputed leader of Northern Ireland unionism.

There were signs from the 1970s onwards that he was prepared to compromise on his deepest beliefs in order to achieve this ambition: an early example was his decision to run for a seat in the European Parliament – which he won – despite his frequent denunciations of that body as the precursor of the anti-Christian dictatorship that the Bible foretold would herald God’s final judgment. His huge victories in 1979 and 1984 allowed him to believe that he could be unionism’s messiah.

Paisley was a “big man” in every sense, and a big figure in 20th-century Irish politics. His mixture of powerful religio- political motivation and brilliant command of language make him a peculiarly Irish figure. His late “road to Damascus” conversion to moderation and power- sharing with the ancient republican enemy saved a generation from the mayhem he had done so much to inflict on their parents.

He will live long in our memories, for reasons both bad and good.

Andy Pollak, a former Irish Times journalist, was co-author with Ed Moloney of a biography of Ian Paisley, and is the former director of the Centre for Cross-Border Studies. Breda O’Brien is on leave