O’Connell Bridge was blocked at both ends this evening

All roads leading to O’Connell Bridge have been blocked by protesters with banners calling for the jailing of the Anglo bankers and expressing Republican sentiments. A number of Dublin buses are stuck on the bridge, unable to move. 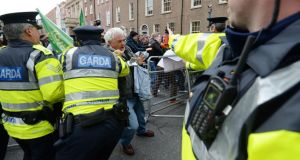 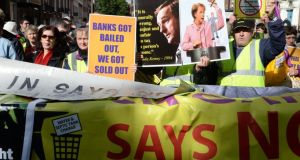 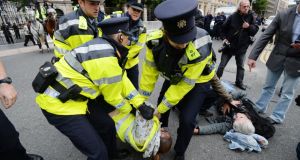 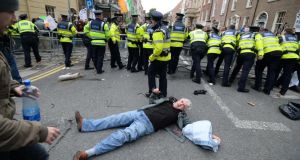 Three people were arrested this evening for  public order offences after a number of protests in Dublin city centre. Three other people were injured and brought to St James' Hospital.

A group of about 300 people blocked access to O’Connell Bridge during rush hour after breaking away from an earlier protest outside the Dáil.

All traffic up and down the quays - as well as that moving north and south between d’Olier Street and O’Connell Street - was blocked by individuals who either sat or stood in the centre of the road.

Several double-decker buses were marooned on the bridge and passengers were forced to disembark and find alternate ways to reach their destinations. Some passers-by expressed dissatisfaction with the disruption.

Protesters carried posters and banners calling for bankers to be jailed while there were chants to “take back our city”. Members of the gardaí were also subjected to threats and verbal abuse.

At one point, one of the protestors with a megaphone directed the others to form single-file lines across the length and breadth of O’Connell Bridge in order to maximise the challenge for gardaí to disperse them.

“Let’s form as many lines as we can so that the whole bridge is blocked,” he said. “This is absolutely pivotal – it’s shutting down the city and stopping the movement of traffic.”

While some of the protestors linked arms and spread out across wider distances, the manoeuvre was only partially successful. At about 7pm, the man with the megaphone told the crowd gardaí in riot gear had been deployed to disperse them, and directed them to return to Leinster House in order to evade them.

Earlier, protesters were repelled with pepper spray by gardaí outside the Dáil.

Scuffles broke out when the protesters rushed Garda barriers set up on Molesworth Street near the gates of the Dáil, which returned after its summer recess

Several hundred protesters from a range of groups had gathered from early today in the area around Leinster House, demanding that the Government pursue alternatives to austerity.

The Dáil resumes today after the summer recess and there was a significant Garda presence in and around Kildare Street from dawn.

The mounted unit, dog unit and regular members of the Garda all formed part of a heavy presence outside the Dáil this evening. There were clashes at about 4.30 when a number of protesters tried to break through the Garda barrier.

A number of people were treated at the scene by ambulance crews.

Among the groups protesting were Anti-Eviction Ireland, Pensioners Against Cuts, Irish Republican Voice and the People’s Assembly, which consists of trade union, civil society and political organisations.

Taoiseach Enda Kenny, Minister for Finance Michael Noonan, Tániaste Eamon Gilmore, EU authorities in Brussels and mainstream media outlets were among those who the demonstrators were directing their anger at.

Addressing the crowd earlier, Dominic Gaughan, a protestor from Co Wexford, said it was time to “overthrow this Government”.

He said the public had been hit with pay cuts, VAT increases, the universal social charge, property and “other stealth taxes” while “big shot TDs” gave themselves pay rises.

“The Government is living in a bubble while the people suffer through austerity and pain,” Mr Gaughan said.