Thousands march in cities across Ireland in support of Gaza

About 22 children have been killed in Israeli air strikes 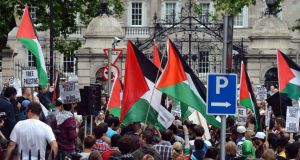 About 3,000 people protested in Dublin today against Israel’s continued bombardment of Gaza, as demonstrations also took place in Cork, Limerick, Galway, and, Derry.

The Ireland Palestine Solidarity Campaign, which called the protest, said they had expected “between 50 and 100 people” to turn up at the Spire in O’Connell Street but so overwhelmed were they with the numbers that they decided to march, first to Leinster House and then onto the Israeli embassy in Ballsbridge.

They co-ordinated with Gardai on scene before moving off.

Carrying banners with such slogans as “Free Palestine”, “One Palestinian child has been killed by Israel every three days for the past 13 years” and “Boycott apartheid Israel”, protestors chanted “Free, free Palestine” and “From the rivers to the sea, Palestine will be free.” Many also carried Palestinian flags.

Among the crowd were a number of public representatives, including TDs Mary Lou McDonald and Dessie Ellis (both Sinn Féin), Joan Collins (United Left), Richard Boyd Barrett (People Before Profit), MEP Lynn Boylan (Sinn Féin) and a number of councillors. Sinead Ahern, chair of the women’s group in the Labour Party was also there.

More than 100 people have been killed in Gaza by Israeli air strikes since the latest offensive on Gaza, being called Operation ‘Protective Edge’, began on Tuesday.

Some 22 of those dead are children and over 700 people have been wounded.

The people of Gaza are victims of a terrorist state.”

He said the Israeli “project” was to “cleanse” Gaza of all Palestinians.

He said the Israeli state would not be able to do this without the financial support of the United States the EU.

John Douglas, president of Congress, said the trade union movement would be launching a “boycott campaign” in coming weeks urging people not to purchase goods from the illegal Israeli settlements, including some agricultural produce, Soda Stream products and plastic garden furniture manufactured by Keter.

“We are calling on Ireland to bring in a ban on illegal settlement goods and on pension funds to disinvest from Israel.”

Dr Ahmed El-Habbash, a Palestinian living in Ireland said it was wrong to describe the conflict as a “war”.

He said this implied there were “two mighty states” at war with each other.

“This is a war on the Palestinian people. They are a people besieged in a concentration camp, 1.8 million people in a 300 km square piece of land. Their land was occupied in 1948 and their land is now called Israel.”