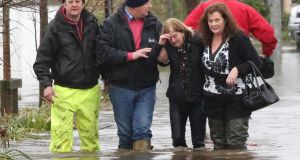 There are at least 250 flash-points in the State which are major flood risks and to build defences for them would cost “tens of billions of euro”, the Minister with responsibility in this area has said.

He said a national debate was required about how the State would prepare for such flood events in the future especially in the knowledge that they would become more regular occurrences in the future.

Minister of State for the Office of Public Works Brian Hayes said this morning that one of the few areas that capital spending had not been cut during the recession was flood defence, with some €250 million being allotted to it over the next few years.

But he told The Irish Times that there was a need to recognise the scale of the challenge in developing a comprehensive flood abatement strategy and getting national agreement on the priorities in that area.

In that respect, he welcomed the comments from Minister for Public Expenditure Brendan Howlin this morning that the strategy needs to be reappraised in in light of such extreme weather events becoming a regular pattern in Ireland. A further spell of heavy rains and high tides are forecast for later today.

“When I first came into the OPW I got a very detailed briefing on flooding. In the view of the experts here there were at least 250 hotspots across the country that were prone to flooding, and could give rise to major tidal or fluvial floods,” he said.

To build defences for each of these hotspots he said, would cost tens of billions of euro.

“The issue is how do you use the resources we have to maximum effect. You need to prioritise your goals to the maximum benefit to reduce human suffering in such situations. We have a model where the first priority is to prevent the potential of fatalities; then to protect households; then to protect commercial property and then to protect farmland.

“We need a national debate about where we build and how we deal with such situations,” he said.

The Minister of State accepted that some “appalling decisions had been made in the past by planners and politicians” that had located development on flood plains or on land that were known to be vulnerable to flooding.

He said that these days planners stay “a million miles” away from areas prone to flooding as a matter of course.

The OPW is finalising a comprehensive mapping and planning project on flood management based on the seven major river catchments which will be submitted to the EU by 2015.

Some seven flood defence schemes are ongoing at present, with financing of €45 million. A further 15 schemes are also in the planning stages. All involve complex problems and solutions, both from hydrological and planning perspectives.

The latest series of major flooding incidents – and the many millions of euro in damages that have been causes – is expected to have dominated this morning’s Cabinet meeting and is expected to be a major theme during Leaders Questions this afternoon.

The Government is expected to agree a fund of €10 million in emergency aid to those whose homes have been ruined by flooding. This fund could be supplement as a number of Ministers last night and this morning, including Mr Howlin and Taoiseach Enda Kenny, agreed it might not be enough. Mr Kenny siad the Cabinet will examine the possibility of applying for EU relief funds.

The worst-affected counties have been Limerick, Clare, Cork, Waterford, Wexford and Kerry.

Minister for the Environment Phil Hogan was due to brief the Cabinet either this week or next on the major floods early in January, based on reports he received from local authorities in affected areas.