Ten things you need to know about tribunals of inquiry

They cost a fortune, last for ages, become complicated and lawyers make a fortune 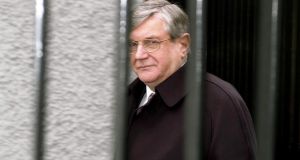 The Government has decided to establish a tribunal of inquiry into allegations that Garda whistleblower Sgt Maurice McCabe was subjected to a smear campaign by senior gardaí.

Here are ten things you need to know about tribunals of inquiry:

1) They cost a fortune

The Planning tribunal cost €159 million, the Morris tribunal about €70 million and the Moriarty tribunal €42 million. The bills were still coming in for the beef tribunal 20 years after it finished.

2) They last a long time

The Planning tribunal was set up in 1997, delivered its final report in 2013 and is still in the process of being wound up. The Moriarty tribunal also dates from 1997 and delivered its final report in 2011. Of recent inquiries, only the McCracken tribunal into alleged payments by Dunnes Stores was completed in under a year. Aside from the slow pace, there tends to be lots of interruptions for legal challenges, reluctant witnesses and the like.

One thing tends to beget another in tribunal-land. For example, the Planning tribunal was set up to examine payments made to Fianna Fáil minister Ray Burke, and was supposed to be completed within three months. However, its terms of reference were extended and it ended up looking at a swathe of planning corruption allegations in Dublin.

4) The findings are not legally binding

Courts require that matters be proven “beyond reasonable doubt”. Tribunal generally make findings “on the balance of probabilities”. That means their findings cannot be used in court and any criminal prosecutions have to be started separately.

5) The public loves them - at the start

Created in a cauldron of outrage, tribunals tend to begin with widespread popular support. The public gallery at the Planning tribunal was regularly packed in its early years and people queued to buy the first main report it produced. Though Bertie Ahern’s appearance at the inquiry was highly charged, interest waned with the years as the cost grew and the limitations of the process became more apparent.

6) The lawyers get rich

You bet. Up to 80 per cent of the costs of the tribunal will go on solicitors and barristers. Not just the tribunal’s legal team but also on paying the legal costs of third parties.

7) They change the way we view things

Tribunals have profoundly changed the way the public views issues such as planning corruption or the Haughey era.

8) They take place behind closed doors

Of course you can walk in and take a pew at the back of the inquiry, but up to now no cameras have been allowed to film proceedings.

Tribunals serve as a release valve for governments at times of high political controversy, a chance to park allegations for as long as possible (let’s say the length of a political career). Of course, things don’t always work out as planned; take the example of the Planning tribunal, which was set up by a Fianna Fáil government to neutralise the attacks on one minister, Ray Burke, but ended up investigating many of his colleagues.

Only the late Liam Lawlor was foolish to go toe-to-toe with a tribunal chairman, and got jailed for contempt for his troubles. Everyone else knows that, no matter how bad things get at the inquiry, they cannot lock you up.