Tax hike on cigarettes and tobacco worth extra €68.1m in year

Packet of 20 now at €12.70, with cigarettes priced higher in Ireland than in rest of EU 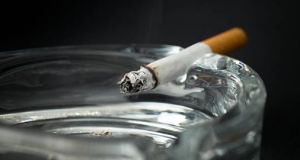 Tax on tobacco products represents 79 per cent of their retail cost, Minister for Health Simon Harris said, as he announced that a 20-pack will now cost €12.70 after the 50c increase announced in the budget.

Roll-your-own tobacco will cost an extra 25c, as part of tax hike agreed without a vote on Tuesday night.

“Ireland is committed to high taxation of tobacco to encourage young people in particular” to stop smoking, Mr Harris said.

Cigarettes already cost more in Ireland than anywhere else in the EU.

Smoking rates had dropped from 24 per cent to 18 per cent, according to the latest figures, and the Minister said the quantity of cigarettes being smoked had also dropped.

Sinn Féin’s Jonathan O’Brien said his party supported high taxation on tobacco because of the negative impact of smoking, including passive smoking.

The tax increase was part of a combination of ways to cut smoking, including a properly funded health system and programmes to support people in giving up smoking.

However, Mr O’Brien said his party would not vote for the measure if there was a vote, because the €68.1 million expected to be generated from the increase would not go to support programmes to assist smokers to quit, but instead into a “black hole”.

Independent TD Mattie McGrath said he did not smoke and “I don’t like smoking, but I think we’re tackling this the wrong way”.

He said the increase was putting huge pressure on the budgets of people who are addicted, and “we are not touching the whole illicit trade of cigarettes”.

Labour leader Brendan Howlin said it was “extraordinarily positive” that the smoking rate was down to 18 per cent.

But he added: “If we’re going to price people out of the ability to buy cigarettes, we should support them”, to quit smoking.

He warned of the dangers of smuggling, and pointed to people selling cigarettes in housing estates.

The composition of those cigarettes might be “extraordinarily bad for your health”.

Labour TD Sean Sherlock highlighted the “profiteering” in the cost of nicotine-replacement therapies, which he said “prove to be a disincentive for people to move to alternatives to smoking”.

He said the products were covered by the medical card and “the pricing mechanism is obviously too high”.

Mr Harris pledged to look at the pricing of nicotine-replacement therapies.

He pointed out the illicit trade in tobacco products was a major focus for the Revenue, which last year seized 34.2 million cigarettes with a value of more than €19 million.

He said there were a number of supports in place, including programmes such as the HSE Quit campaign. There were also specialist staff in place to counsel smokers to quit.