Ship expected to be commissioned next year 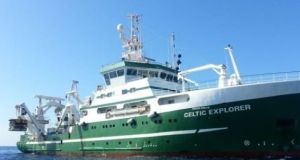 The Celtic Explorer: has steamed over 380,000 nautical miles and conducted 595 science surveys during its 21 years of service.

Funding has been provided in Budget 2019 for a new State-run marine research ship.

A 50 metre-long vessel had been signalled in the National Development Plan earlier this year, but funds have now been provided for the Marine Institute to build it.

While not disclosing the cost, Minister for Agriculture, Food and Marine Michael Creed said it would form part of the €133.8 million seafood programme, which would also help to fund “vital investment” in the west Cork and south Donegal fishery harbours of Castletownbere and Killybegs.

The new ship will replace the 21-year-old 31-metre-long RV Celtic Voyager, which was the State’s first purpose-built research vessel.

It is expected to be commissioned next year, and will complement the existing 65 metre-long Celtic Explorer when it arrives around 2021.

Mr Creed said it would “provide critical national infrastructure to enable Ireland to address the considerable challenges of Brexit and the Common Fisheries Policy, as well as climate-induced impacts on our oceans”.

It will be built to undertake research trips of up to three weeks, similar to the capability of the Celtic Explorer.

The RV Celtic Voyager marked 20 years of service in July 2017. It was built in the Netherlands to replace the existing RV Lough Beltra – used from the late 1970s by the Geological Survey of Ireland.

By summer 2017, the Celtic Voyager had steamed over 380,000 nautical miles and had conducted 595 science surveys, including mapping Ireland’s seabed and conducting key fisheries surveys.

Among over 200 shipwrecks it mapped were the RMS Leinster, which was sunk by a German submarine a century ago this week in Dublin Bay, along with the wrecks of the RMS Lusitania and the Kowloon Bridge, both off the Cork coast.

It also confirmed the location of the “Galway Bay fault”, demarking the limits of Galway’s granite landscape running north-west to southeast between west Connemara and the Aran islands.