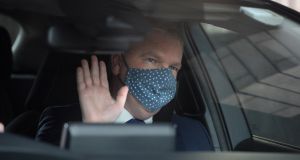 Michael McGrath said there was a reality that the State had faced challenges in filling leadership posts in the health service. Photograph: Dara Mac Donaill / The Irish Times

The Taoiseach verbally told the Cabinet that an enhanced pay package was to be provided to the next Department of Health secretary general but did not set out the salary f was to be raised by €80,000, the Minister for Public Expenditure has indicated.

Michael McGrath said the proposed new salary of €292,000 for the next secretary general of the Department of Health was commensurate with the level of responsibilities and unique challenges attached to the job.

The Minister told the Oireachtas committee on Finance on Tuesday that the former secretary general of his department Robert Watt had no input into the sanctioning of the €292,000 salary.

Mr Watt was subsequently appointed by the Government to be secretary general in the Department of Health on an interim basis pending an open competition.

The Minister said Taoiseach Micheál Martin had briefed the Cabinet verbally in January that Mr Watt was to be appointed as interim secretary general of the Department of Health.

He said the Taoiseach had said there would be an enhanced package put in place for the substantive role following the competition. He said Mr Maritn had not set out the specific salary level to apply.

Mr McGrath told the committee that in deciding on the new salary level he had taken into account a number of factors.

“It is no secret that the post of secretary general in the Department of Health is a highly complex one with a very challenging brief, especially in the midst of a global pandemic. There are very significant responsibilities attached to this role including: the ongoing management of the response to the Covid public health emergency; implementing the Government’s ambition to deliver on Sláintecare; and the management of the greatly increased budget of €22 billion for Health in 2021.”

The Minister said there was a need for an enhanced salary to attract the very best candidates from around the world.

He said there was a reality that the State had faced challenges in filling leadership posts in the health service. He said the position of chief executive of the HSE had had to be advertised twice.

The Minister accepted that the new higher pay rate could lead to knock-on claims but suggested any such demands would be resisted.

He said he was not sure this would be as big a problem as some people believed.

Plucked out of air

Mr McGrath faced strong criticism from members of the committee about the proposed pay level.

Pearse Doherty of Sinn Féin said there was no indication of how the Government had decided on the €292,000 rate.

He said it seemed to have been “plucked out of the air”.

Aontú leader Peadar Tóibín said people’s jaws dropped when they saw the salary. He said the director general of the World Health Organisation was paid less than €200,000.

Solidarity TD Mick Barry said the proposed increase in pay for the post was “outrageous”. He said nurses were getting a one per cent pay increase while the rate for the role of secretary general in the Department of Health was being raised by 40 per cent.