Taoiseach to stress Europe stronger with Britain in EU 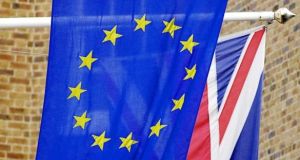 Government concedes that Brexit would present an economic challenge for the Republic. Photograph: PA

Taoiseach Enda Kenny will put a strong emphasis on his view that Europe is better off with Britain remaining in the EU when he makes a major address in London next week.

Mr Kenny is due to speak to the Confederation of British Industry on Monday and is expected to devote a considerable part of his speech to the possibility of Brexit.

A Government spokesman on Thursday responsed to an Economic and Social Research Institute (ESRI) report which showed that trade between Ireland and Britain could drop by about €10 billion annually in the event of such an eventuality.

He said that that it was already well understood that a Brexit would trigger an economic challenge. While the decision is one for the British people, he added, the Taoiseach’s view was that it would be better if Britain remained an EU member.

He also said the Government supported some of the British criticisms of the EU, noting Mr Kenny’s belief that the potential of the single market is not being maximised as it should be.

In other political reaction, Fianna Fáil foreign affairs spokesman Brendan Smith said the ESRI report made for sobering reading and that EU solidarity should be re-established.

“We in Fianna Fáil believe that awareness needs to be created across all of this country of the gravity of this particular issue in relation to trade, employment, tourism, agriculture, fisheries and food, free movement of people and of course Northern Ireland, ” he said.

“Britain is our nearest neighbour and our largest trading partner. If Britain votes to leave the EU the knock-on effects will be felt the length and breadth of the country, but particularly in the Border counties and my own constituency of Cavan Monaghan, ” he added.

“I have been particularly vocal to date on the negative implications which a British exit from the EU would have on the Border regions. For those of us who live along the border, the effects would be massive.

“Furthermore, there would be social as well as economic consequences; a British exit could see the reintroduction of Border controls and checkpoints, custom checks and other such negative measures,” she said.

The British Irish Chamber of Commerce said the report highlighted the damaging repercussions Brexit would have for the British and Irish economies.

“A possible departure of Britain from Europe would significantly impact Irish agriculture, food and beverage and base metal sectors, according to the paper,” said its director John McGrane.