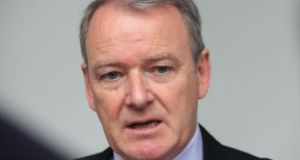 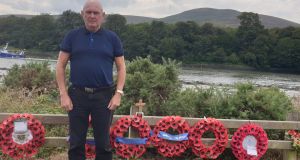 Alex Blair, brother of the late Donald Blair, at the memorial to the soldiers at Warrenpoint. Photograph: Blair family 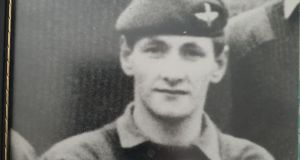 Corporal Donald Blair (23) who was one of 18 soldiers killed in the IRA’s ambush at Narrow Water near Warrenpoint, Co Down, in 1979. Photograph: Blair family

Taoiseach Micheál Martin said he was “shocked and dismayed” by a controversial tweet sent by a Sinn Féin TD that referenced IRA attacks during the War of Independence and the Troubles.

Mr Martin said that the since-deleted tweet by Laois-Offaly TD Brian Stanley was “appalling” and has done “huge damage” to building trust and reconciliation on the island of Ireland.

Mr Stanley’s continued chairmanship of the Dáil Public Accounts Committee over the remarks was a matter for Sinn Féin to deal with “as a party and as a movement,” said the Taoiseach.

Eighteen British soldiers were killed at Warrenpoint by the Provisional IRA on August 27th 1979. On the same day, Lord Mountbatten, a prominent member of the British Royal Family, was killed by a Provisional IRA bomb aboard his boat at Mullaghmore, along with three others.

In the 1920 incident at Kilmichael, a total of 17 British soldiers were killed, alongside three members of the War of Independence-era IRA.

Mr Stanley later deleted the tweet and apologised, describing it as “inappropriate and insensitive”.

He described 1979 as a “very dark year” and the day of the Narrow Water attack “a very dark day” and condemned the “inhumanity” of the “mocking tone” of Mr Stanley’s tweeted comments.

“One should never mock people in terms of the deaths of loved ones and there are many, many families who lost their sons in that attack at Narrow Water,” he said.

Mr Martin said Mr Stanley was “a very senior member of the party, it was clearly a premeditated tweet, it was left there for some time and worse, it was endorsed by many, many members and supporters of Sinn Féin.”

“This now does huge damage in terms of reconciliation. It erodes trust in terms of, ‘are people really genuine within Sinn Féin about reconciliation?’ or, ‘is it all about victory: we were right, you were wrong, we won, you lost’ type of narrative,” he said.

“You can’t keep going on saying, you want to create a new Ireland, you want to genuinely reconcile, you want a comprehensive legacy process when senior members of your party engage in this manner, so I think Sinn Féin should deal with this in terms of Brian Stanley’s position,” he said.

The Taoiseach took the reference to the British “establishment” in the tweet as a reference to the IRA’s assassination of Lord Mountbatten in Co Sligo in the bombing of his fishing boat off Mullaghmore, Co Sligo that took place on the same day as the Narrow Water attack.

“I can never get over the horrific nature of that crime on that day where young boys were on board with guests of Mountbatten,” he said.

I will be writing to the Ceann Comhairle of the Dáil about this shameful tweet. Although deleted, it is outrageous that someone with such warped views can hold a senior position in the Dáil. SF talk about respect & equality but there’s not much sign of respect for victims. pic.twitter.com/dqMdWLI4rp

“How anyone can do that is beyond me. It is so inhumane a thing to do and how one then refers back to it in the manner Brian Stanley did is deeply, deeply offensive.”

Mr Martin said that Sinn Féin “need to atone for what happened on that day.”

Mr Flanagan said the comments were “part of a pattern” and of sufficient seriousness to merit a statement from all parties in the Dáil condemning the tweet.

The brother of a soldier killed at Narrow Water in 1979 has called on Mr Stanley to resign .

Alex Blair, whose 23-year-old brother Donald was one of 18 soldiers who died in the attack, said Mr Stanley should be disciplined by his party leader, Mary Lou McDonald, and he should be removed as chairman of the Dáil’s Public Accounts Committee.

Mr Blair said he was “very angry” and “hurt” by the tweet. “My mother died three years to the day after my brother, of a broken heart... She never got over it, just gave up,” he said.

Referring to Mr Stanley, he said “these people need to be taught lessons, they can’t come out with stuff like that, hurt people’s feelings, bring all the hurt and pain back and then just say, ‘I’ve deleted it, I’m sorry’.”

Mr Blair said comments like Mr Stanley’s were damaging to the peace process in Northern Ireland and was evidence of a different approach towards unionist victims.

“People want to move on with the peace process, and then you’ve got people like that coming out and going away back to the Troubles.

“The peace process has to be a two-sided thing. They [Sinn Féin] can’t keep coming out with statements and bringing it all back, not just for the victims of Warrenpoint but for all the victims of the IRA,” he said.

“You can go back to Barry McElduff going about the shop with a loaf of bread on his head on the anniversary of the Kingsmill massacre. They [Sinn Féin]are not interested in crossing bridges and mending bridges,” he said.

Mr McElduff resigned as MP for West Tyrone in 2018 after widespread condemnation of social media post in which he shared a video of a loaf of Kingsmill-brand bread on his head on the 42nd anniversary of the massacre of the same name, in which the IRA killed 10 Protestant textile workers in south Armagh.

Mr Blair also called on the Government to play its part in bringing those responsible for the Narrow Water killings to justice.

Sinn Féin TD Eoin Ó Broin said no further action was under consideration by his party. Mr Ó Broin added he did not think Mr Stanley should stand aside as chair of the PAC, pointing out that he had apologised for the tweet.

He said Mr Stanley was a “capable and competent chair” of PAC, and that if “every time somebody made a mistake, even a serious mistake, was cause for resignation from a chairpersonship there wouldn’t be a chair of an Oireachtas committee”.

“What he did was wrong, he’s acknowledged that, he’s accepted it and he’s apologised and now he needs to make sure it doesn’t happen again.”

Mr Ó Broin added that he was “disappointed on a personal level” by Mr Stanley’s tweet and that the “language was wholly inappropriate and it will have caused hurt”.

Mr Stanley’s mistake should act as “a lesson to us all”, Mr Ó Broin told RTÉ Radio’s News at One. “We’re entering two years of commemoration with War of Independence and the Civil War, we have to find ways and languages of remembering and talking about the past without being tribalistic or hurtful.”

Conversations around commemorations must be “thoughtful and respectful”, Mr Ó Broin said.

As an experienced TD and chairman of the Public Accounts Committee, Mr Stanley “should know better than this,” Mr Coveney told RTÉ Radio’s Morning Ireland.

This was “another case of the mask slipping” with a member of Sinn Féin “coming out with this bile.”

Such comments were “really unhelpful and insensitive”.

Sinn Féin needed to make a clear statement on the issue and that “these type of comments need to stop”, Mr Coveney said.

Sinn Féin was a party that enjoyed electoral success with that there was a responsibility “to move away from this kind of language,” he added.

“His role as TD and chair of Public Accounts Committee is quite a senior position, that role comes with responsibility,” said Ms Murphy. “It’s going to be very difficult to pick up as though it’s business as usual tomorrow.”

Innocent Victims United, one of the groups representing victims of the Troubles, also condemned the tweet, saying: “These comments from one of the new crop of Sinn Féin, elected a TD in 2020 illustrates that absolutely nothing has changed within the mindset of their representatives.”

The group’s spokesman Kenny Donaldson said: “For a Sinn Féin TD to continue to eulogise these events in 2020 is depraved and sickening and highly insulting to the families broken by these heinous events, particularly the latter Narrow Water massacre where first and second generation relatives are still alive as well as many of the surviving injured.

“There is no place in this society (north or south of the border) for the glorification and romanticisation of terrorism. All eyes are on the Sinn Féin leadership in how they respond. Do they condone Brian Stanley’s remarks, will they simply turn the other way and pretend they haven’t heard the remarks or will they actually deal with it?”