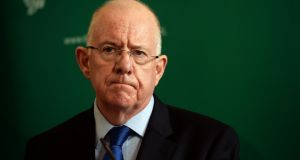 Charlie Flanagan: The Minister for Foreign Affairs expressed concerns to Trump administration officials over the “suddenness and the arbitrary nature” of the US immigrant ban. Photograph: Eric Luke

The Taoiseach’s scheduled visit to the White House next month is a “no-brainer” and should go ahead, Minister for Foreign Affairs Charlie Flanagan has said.

Speaking in Washington following meetings with senior officials from president Donald Trump’s administration, Mr Flanagan said it was “essential” that the visit proceeds as planned.

“As Minister for Foreign Affairs, I recognise that dialogue and active engagement is the hallmark of international diplomacy,” he said. “For me it’s a no-brainer. Enda Kenny has been invited. It is essential that he avails of an opportunity early in the administration to reinforce the important links between Ireland and America.”

Mr Flanagan said that the annual St Patrick’s Day engagement is “much more than a bowl of shamrock or a photograph”, as has been portrayed by members of the Opposition.

Rather, he said, “It is a real opportunity that is the envy of scores of heads of state in government who will not have access to that type of engagement.”

Mr Flanagan said he had raised concerns about Mr Trump’s executive order halting immigration from seven Muslim-majority countries with a number of senior Republicans, including national security adviser Mike Flynn and his deputy, KT McFarland. Both are members of Mr Trump’s national security council, which was involved in drafting Friday’s order that provoked widespread international criticism.

Mr Flanagan said he had also secured assurances from senior Republican lawmaker Paul Ryan that legislation on immigration reform will be brought forward by the Trump administration by the end of the year.

He said he raised the status of the estimated 50,000 undocumented Irish living in the US with Mr Ryan, the speaker of the House of Representatives.

Despite the administration’s clampdown on immigration, there is cautious optimism in Government circles that the situation of the undocumented Irish living in the US will not be unduly affected by the shift in policy, despite the lack of clarity surrounding Mr Trump’s immigration order.

The issue is likely to dominate next month’s scheduled visit of the Taoiseach to the White House for St Patrick’s Day.

Congressman Mick Mulvaney, Mr Trump’s nominee for the senior position of budget director, was among some 20 attendees at a dinner hosted by Mr Flanagan at the Irish embassy on Wednesday night. The event was attended by congressmen from both the Republican and Democrat parties.

While the issue of immigration is understood to have dominated discussion at the Friends of Ireland dinner, the long-standing US role in the Northern Ireland peace process was also underlined and raised by Mr Flanagan during bilateral meetings.

Mr Flanagan’s three-day visit to Washington marks the most high-level engagement to date by the Government with the new US administration. Other prominent Irish-American politicians who met with Mr Flanagan during the visit include congressmen Pete King and Richie Neal.