Email found after three days, but asks about bid, rather than complain about practices 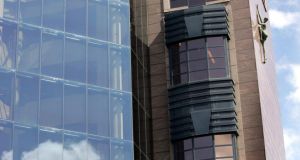 The search was triggered by a report that the underbidder, New York-based Fortress Capital Formations, had written to the Taoiseach in February 2014 complaining about “business practices” during Project Eagle

Three days after it began an extensive search, Taoiseach Enda Kenny’s office has discovered an email sent to it by an unsuccessful bidder for a 800-property loan portfolio in Northern Ireland.

The search was triggered by a report that the underbidder, New York-based Fortress Capital Formations, had written to the Taoiseach in February 2014 complaining about “business practices” during Project Eagle. This was the process used by the National Asset Management Agency to dispose of the €1.5 billion Northern Irish portfolio.

However, the email uncovered yesterday from February 13th, 2014 makes no complaint nor raised any concern.

Addressed to the Taoiseach’s special adviser Andrew McDowell it is an introductory email, expressing interest in putting a bid in for the portfolio.

Written by Michael George, its managing director, it referred to a €1.25 billion portfolio bought by the company in the Netherlands and Germany, as well as other pools of non-performing and sub-performing debt in Ireland.

Mr George, who is originally from the North of Ireland, said he had a “keen interest in this €4 billion portfolio and would like to throw our hat in the ring.”

He asked Mr McDowell did he have any insight as to how to get involved. Mr McDowell emailed an official in NAMA asking could Fortress be put in contact with those handling the sale on the behalf of the agency.

A spokeswoman said last night the Taoiseach’s office was not looking for any other letter or record, as it had conducted a thorough search of its correspondence files form the period, and uncovered nothing.

Nama has said it received no letter of complaint from Fortress about the process.

The issue was raised in the Dáil this week by Fianna Fáil leader Micheál Martin.

On Thursday Fianna Fáil was trying to ascertain if the email correspondence published by the Government on its website, merrionstreet.ie, was the only such exchange.

Its contents do not tally with the contents of the purported letter, as reported in The Irish News.

Speaking in New York following his address to the UN General Assembly, Taoiseach Enda Kenny said, as far as he is aware, the letter published on his website is the only one from the Fortress company.

Mr Kenny said that if any others came to light, he would publish them.

Fianna Fail leader Michéal Martin had said the Department of Taoiseach had been contacted with concerns over sale of NAMA’s Northern Irish loans. The letters published yesterday showed Fortress Capital contacted Mr Kenny’s advisors to express an interest in the loans.

Andrew McDowell, Mr Kenny’s economic advisor, referred the queries to NAMA and the Taoiseach said this is the only correspondence he is aware of.

“The email is up on the website for all to see,” Mr Kenny said. “As far as I can understand, that is the only correspondence and if there is any other I will publish that as well but I don’t have any reason to believe that there is and clearly that was passed on to NAMA for direct response to the company involved.

“I don’t have any reason to believe that there is any other correspondence. If there is and it comes to life, I’ll publish it.”