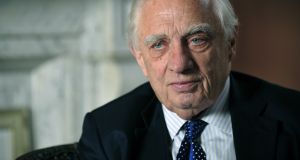 Peter Sutherland: ‘I am absolutely mystified about what is coming out of London.’ Photograph: Aidan Crawley

Former EU commissioner Peter Sutherland has rejected a claim by the British Brexit secretary that there will be no hard trade border in Ireland after the UK leaves the EU.

Secretary of state for exiting the EU David Davis made the comment yesterday during his first visit to Stormont House.

Mr Davis said Brexit would lead to “big opportunities” for Northern Ireland business and said the British government would take “looking after the regions and nations seriously” in its negotiations with the EU. He also said Britain and the Republic both wanted to maintain an open Border on the island and the Common Travel Area.

He said he was “100 per cent” in agreement with British prime minister Theresa May, who spoke on Wednesday of wanting to control immigration and preserve good trade arrangements. He also said the UK was ideally seeking tariff-free access to the EU.

“With respect to access to the single market, what we will seek to do is ideally have a tariff- free access, but this is a matter of negotiation,” he said. “We will be negotiating over an issue I suspect is in the interest of other members of the EU . . . to get a good trading relationship in the long run.”

“I am absolutely mystified, not for the first time in this debate, about what is coming out of London,” he said. “We have been told by a number of Conservative Party spokespeople that Britain will leave the common customs area of the EU. If this is true, the customs union, which relates to sharing a common external tariff of the EU, will have to be maintained by all other EU countries with the UK following its withdrawal. Goods will have to be checked at borders.

“I would be very fearful that they may be heading towards a negotiation that will require a hard Border between north and south in Ireland. Dismissing this as a prospect at this stage is ridiculous.”

In Belfast yesterday, Mr Davis attended talks with DUP First Minister Arlene Foster and DUP Minister for the Economy Simon Hamilton, as well as the inaugural meeting of the Northern Ireland Advisory Group, set up by the Northern Secretary James Brokenshire.

The four core members are the Confederation of British Industry, the Northern Ireland Chamber of Commerce, the Federation of Small Businesses, and the Institute of Directors (NI). Mr Brokenshire said the British government “will get the best possible deal for Northern Ireland” and dismissed suggestions he was out of step with the majority in the North who voted to remain in the EU. “The public of the UK gave a very clear vote,” he said. “We now need to move on and get the best possible deal for the UK and for Northern Ireland.”

Coronavirus: 394 new cases and no further deaths reported in the State 17:45
Louth man’s conviction for IRA membership ‘a miscarriage of justice’ 17:39
Philomena Lee among five given leave to challenge mother and baby homes report 17:48
Bicycle-drawn hearse brings cycling advocate on his last journey 17:31
Covid-19 Vaccine Tracker: What's available in the Republic of Ireland and what else is coming? 16:53