Strategic Communications Unit to be downsized 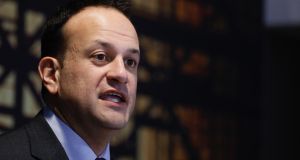 Taoiseach Leo Varadkar: has instructed that any future advertising campaign should require the SCU, and not a media agency, to have final sign-off on copy and layout, to ensure no perception of partisan political bias. Photograph: Dario Pignatelli/Bloomberg

The Government’s Strategic Communications Unit will be renamed and no longer take part in campaigns such as Project 2040 following a high-level review of its role and operations.

The unit’s budget of €5 million will also be reduced as it is downsized, with individual departments resuming the responsibility for information campaigns on Government policy.

However, the review, carried by the State’s top civil servant, is also expected to categorically dismiss allegations that the SCU followed a political party agenda, or put pressure on media organisations to pass off advertising material as “real news”.

The review was conducted by secretary general to the Government Martin Fraser and will be discussed at Tuesday morning’s Cabinet meeting.

While the report will uphold the integrity of the SCU staff and its director John Concannon, it will also point to some failures, including insufficient control by the unit over the content that was carried in local and national newspapers, particularly the lack of “sign-off” powers for final copy.

However, in the wake of the sustained political storm over the SCU’s management of Project 2040, the unit will be downsized and overhauled.

The unit will be primarily responsible in future for continuing the work in streamlining government communications. That will include the development of the new central portal, gov.ie. The work will also include professional development.

However, the unit will operate in the background, in future, leaving all campaigns to individual departments.

Mr Concannon is expected to stay on as director during the transition period which is expected to be completed by the summer. It is not known at this stage if he will remain with the unit.

The SCU has been consistently portrayed as a “spin unit” for Fine Gael and for Taoiseach Leo Varadkar by the Opposition. He accepted in the Dáil recently that constant references to the unit were becoming a distraction.

Mr Varadkar has already instructed that any future advertising campaign should require the SCU, and not a media agency, to have final sign-off on copy and layout, to ensure no perception of partisan political bias.

That stems from photographs of Fine Gael candidates appearing in three (of 25) provincial newspapers which carried Project Ireland advertorials. The Government has insisted those decisions were taken by local editors and not by Government.

Last week, the Dáil approved a Sinn Féin private members motion calling for the immediate disbandment of the SCU, and the establishment of an independent panel to examine the most effective way of operating Government communications, to ensure it is free from political interference.

The motion was supported by Fianna Fáil and by most other Opposition parties and groups.