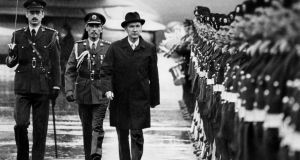 Dr Patrick Hillery: his secretary advised against making the referral. In a handwritten note to the president, Micheál Ó hOdhráin said the legislation had generated a lot of heat inside and outside the Dáil, as well as “heavy mail”. Photograph: Pat Langan

Hundreds of letters were received by President Patrick Hillery in 1985, urging him not to sign legislation that allowed condoms to be purchased without prescription, State papers show.

In a file from the Office of the President, released as part of the 30-year rule, letters warned of the “imminent dangers to which young people will be exposed” and claimed the “lives of decent people” would be “threatened in the streets and even in their homes” if the legislation came into effect.

The Health (Family Planning Amendment) Act 1985 removed the need for a doctor’s prescription to buy condoms and spermicides, as required under 1979 legislation when contraception was first legalised in Ireland. However it stipulated that they could only be bought in chemists, doctors’ surgeries, health boards, family planning clinics and hospitals providing maternity services or treatment for sexually transmitted infections.

The change attracted letters and telegrams of opposition, expressing fears for the moral future of the country’s young people. One Co Monaghan couple wrote to the president to appeal “in the name of God” for him not to sign the legislation.

“We adults have a mature and moral responsibility to do all in our power to ensure that nothing we do will contribute in any way to the lowering of Christian standards and human relationships or to the degradation of the institution of marriage,” they said.

A woman from Clontarf, Dublin, reminded Hillery that it wasn’t long since the people “voted to protect unborn life” in the Eighth Amendment to the Constitution. “This Bill is totally opposed to the whole concept of unborn life because it closes the door to the right of unborn life to be conceived,” she said.

She reminded the president of the “pernicious effects” in other countries of such legislation and listed them as including “broken homes, shattered families, deprived and abused women, promiscuity, lives of decent people threatened in the streets and even in their homes”. Aids and sexually transmitted diseases were a “direct consequence of indecent behaviour”, she added.

“Such are the results when men and women abandon themselves to unrestrained passion; injustice suffered by all, especially the innocent,” the woman said. She had personal experience of it, having worked in the US with “third-level students and working girls”.

A correspondent from Fairhill, Cork, warned that in countries where contraceptives were available, there was “a huge increase in venereal disease and abortions” and asked the president to “look at the temptations”.

“Marriage will be a thing of the past, young people sleeping together, more social problems and more expense on our country,” he said. He urged the president to refer the legislation to the Supreme Court, a mechanism that can be used if a president is uncertain of the constitutionality of a proposed law.

However the president’s secretary advised against making the referral. In a handwritten note to the president, Micheál Ó hOdhráin said the legislation had generated a lot of heat inside and outside the Dáil, as well as “heavy mail”.

Since a conversation they had had “a few days ago”, he made clear privately “to a few influential churchmen the implications of referring a Bill to the Supreme Court”. “They appreciated the point, but will of course, unfortunately, remain silent,” he said. This would avoid what happened in 1940 when the Offences Against the State (Amendment) Bill was referred and deemed not to be unconstitutional. “It has been locked in ‘unchallengeable’ ever since,” he said.

President Hillery signed the legislation on purchasing contraception without prescription on March 12th, 1985.