State decision due soon on excess MEPs if Brexit stalled 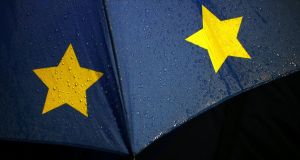 With a delay in Britain’s EU exit looking possible, two of Ireland’s 13 MEPs will not be in a position to take up their seats. Photograph: Hannah McKay

The Government will decide early next week on how it will deal with Ireland having too many MEPs in the event of a delayed Brexit.

The State was allotted two additional MEPs last year as part of a redistribution planned to coincide with Brexit.

However, a clause in the legal document stipulated that the additional seats could only be taken up once Brexit had occurred.

With a delay in Britain’s exit from the EU now looking possible, it gives rise to a scenario where two of the 13 MEPs elected next May will not be in a position to take up their seats.

The Cabinet on Tuesday approved the redrawing of the three constituencies to bring Ireland’s total of MEPs to 13. It means the Dublin and South constituencies will each gain an MEP, bringing their total to four and five respectively.

Midlands North-West will remain a four-seater but will cede some of its territory, namely Laois and Offaly to the South constituency.

The Cabinet postponed the decision until next week on what to do in the event of Brexit not happening on March 29th.

The Minister for Housing and Local Government, Eoghan Murphy, has sought the advice of Attorney General Séamus Woulfe on the issue.

The likelihood, according to Government sources, is that the last two elected in the Dublin and South constituencies will not be in a position to take up their seats until Brexit has occurred and will essentially be put on furlough.

However, decisions will also have to be made as to their entitlement to be paid, or represent their constituents, during the period when they are not officially recognised as MEPs.

The Government also has to be mindful of possible legal challenges from MEPs who are not in a position to take up their seats, said the source, particularly in the case where Brexit has been delayed for a long period.