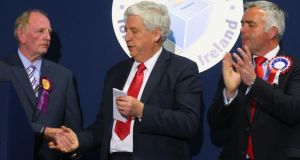 SDLP leader Dr Alasdair McDonnell saw off a robust challenge from both nationalist and unionist competitors to retain his Westminster seat in South Belfast.

As the parliamentary election campaign progressed, speculation had begun to mount that the veteran politician’s formidable support in the constituency was faltering; a situation which the DUP’s Jonathan Bell and Sinn Féin’s Máirtín Ó Muilleoir vigorously sought to exploit in recent weeks.

In the end, Dr McDonnell’s demise turned out to be greatly exaggerated and he topped the poll with 9,560 votes out of a 39,140 turnout.

Somewhat surprisingly, the biggest challenge did not materialise from his Sinn Féin opponent, but rather from a resurgent DUP which improved on its tally from the last House of Commons election to come within 1,000 votes of unseating the incumbent.

Indeed, an early rash of excitement yesterday about a potential charge from former Belfast Mayor Ó Muilleoir proved to be unfounded, and he finished on a distant yet still respectable 5,402 votes.

The gradually increasing split in South Belfast’s nationalist vote will be of some concern to Dr McDonnell, who instead took the opportunity of his victory to revel in what was quite a successful election for his party; an outcome which should serve to quell murmurs of discontent over his continued stewardship of the SDLP.

“I am proud, honoured and humbled that the people of South Belfast have again put their trust in me and the SDLP to represent their interests at Westminster. I take pride in the fact that they reflect all shades of identity and every social class in this city,” he said, before firing a warning to other northern parties in advance of expected coalition negotiations next week.

“The incoming parliamentary term will be a crucial one which will have a significant impact on everyone in Northern Ireland.

“The SDLP remains committed to opposing the Tory agenda and ensuring that we get the best possible deal for Northern Ireland. Other parties must now think carefully about who they will back in the coming days as a government is established,” he added.

Paula Bradshaw also put in a notable performance for the Alliance Party by finishing in third place on 6,711 votes; some 1,600 better than Anna Lo’s 2010 outing.