Some Ministers wary of any move making cannabis more available 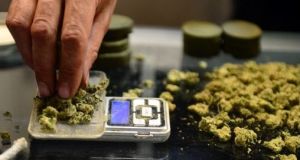 Cannabis for medicinal purposes is weighed for distribution (above). Dr Michael Harty (Independent) has said: “My main concern is that this Bill will open the door to the availability of cannabis for recreational use.” File photograph: Getty Images 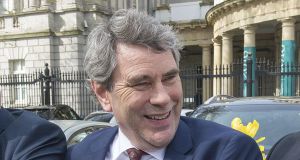 Several Government Ministers have signalled they are wary of any moves that might make cannabis more widely available.

The Government has agreed not to oppose a People Before Profit-Anti-Austerity Alliance private member’s Bill on the medicinal use of cannabis, which was to be debated in the Dáil on Thursday night.

However, Government sources stressed there has been no decision to legalise cannabis for medicinal use and a number of Ministers said privately there were “huge problems” with the Bill.

Minister for Health Simon Harris has asked for an expert report from the Health Products Regulatory Authority (formerly the Medicines Board) on the use of cannabis for medical reasons and on the products available in other jurisdictions.

That report is expected to be delivered in January, prior to the Dáil committee stage of the Bill scheduled for February.

However, even in advance of this report, Ministers have signalled that sweeping changes to the Bill will be necessary.

The Bill proposes to remove cannabis from the Misuse of Drugs Act and would therefore legalise all use of cannabis, including for recreational use. The Government is completely opposed to this.

Even if the Government proceeds to authorise some cannabis products for medicinal use, it is unlikely to accept the new agencies should be part of the package.

Cannabis products are used in several countries for the treatment of the symptoms of a wide variety of illnesses, including certain types of cancer, epilepsy and multiple sclerosis.

Existing policy, according to the Department of Health, is that cannabis is strictly controlled under the Misuse of Drugs Act 1977. It is an offence to import, export, produce, supply and possess cannabis, except in accordance with a licence issued by the Minister.

“A licence to treat a patient with a cannabis product can be considered if an application is received from a medical practitioner, registered in Ireland for a named patient and subject to the doctor taking full responsibility for their patient for the duration of the treatment,” the department says.

The Minister for Health has been advised he may be able to authorise the use of cannabis by means of a statutory instrument, without the need for a Bill passing through the Dail.

Independent TD Michael Harty has said he will vote against a Bill to allow the use of cannabis for medicinal purposes.

Dr Harty told The Irish Times he would not be supporting the legislation proposed by People before Profit TD Gino Kenny.

The Independent TD, who is also a doctor, said he believed this was a back door to the decriminalisation of cannabis.

Mr Harty said: “The Bill has a number of flaws and I have a number of concerns about it at this stage.

“So I do not believe we should allow its passage to committee stage and then try to fix all of the flaws then.

“My main concern is that this Bill will open the door to the availability of cannabis for recreational use.”

The concerns of Mr Harty centre on one particular section of the Bill, which bans the smoking of cannabis in workplaces.

He says this leads to an implication that smoking cannabis elsewhere is legal.

The Bill has already secured the support of Fianna Fáil, Sinn Féin, Labour, the Social Democrats, the Green Party and the Anti-Austerity Alliance.

Fine Gael had initially said it would oppose the legislation and await the recommendations of a review by the Health Products Regulatory Authority.

However, it is likely to abstain in the vote, which will take place next Thursday.

The Bill, which is to be debated on Thursday, provides for the regulation of cannabis for medicinal use so that patients can receive a legally protected, secure supply that is safe and effective.

One cannabis-based medicine, Sativex, is authorised for the treatment of multiple sclerosis in limited circumstances.

Legislation could be amended to allow for its prescription on a wider basis.

Cannabis for medicinal use is permitted in the Netherlands, Croatia, Malta, the Czech Republic, Australia, Canada and a number of US states.

The Bill is also expected to receive the support of three members of the Independent Alliance, including Minister of State at the Department of Health Finian McGrath.