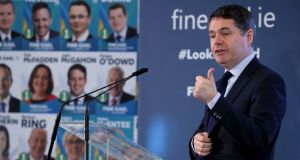 At a press briefing on its tax proposals on Thursday, Minister for Finance Paschal Donohoe attacked the tax plans of its two main rivals, claiming both would leave Irish taxpayers worse off.

The main focus of Mr Donohoe’s attack was Sinn Féin, whose manifesto he described as a series of spending plans and tax cuts that would cause huge difficulty to the economy.

He accused the party of playing a “con-job on the Irish people” with its manifesto.

“They are plans that are built on sand,” he said. “Sinn Féin thinks it can carry off a three-card trick making Ireland less attractive for international companies, while gaining ever increasing taxes from the same companies.

“It won’t work and Pearse Doherty knows it.”

He also claimed that buried in the manifesto was a proposal to increase subsidies from what Sinn Féin called “gold plated” pensions.

“They reduce the earnings limits and reduce the standard fund threshold to €1.2 million.

“It will reduce the size of the relatively modest pensions that these people would expect to enjoy in retirement and prevent people from saving more of their hard-earned money in the first place,” he contend.

On Fianna Fáil’s tax plans he said it had not taken into account the projected wage increases of almost 20 per cent over the next five years.

Fine Gael proposes to raise the band for the higher rate of tax to €50,000 and abolish USC for those earning €20,000 or less. These two packages will cost a total of between €2.4 billion and €3 billion.

Mr Donohoe claimed Sinn Féin’s manifesto promises were “a threat to our economy and our ability to create public services”.

When it was pointed out Sinn Féin got all 300 items in its manifesto costed by the Department of Finance, he responded: “My contention is what this means for the people in work, for the 180,000 people who have jobs in the past five years.

“This is about people who are concerned about what their pension pot will mean in the future [if Sinn Féin limits the thresholds to €1.2 million].

“I am not doubting they have asked the Department of Finance to cost their proposals. What I am questioning, and that represent a huge challenge, is the effect it will have on jobs, on incomes and pensions in the future.”

He argued people needed to reflect on what was being offered.

“Does change look like the kind of danger that Sinn Féin is offering?

“I understand that people want to see more progress in housing and health, this is what the party [Fine Gael] wants as well. In order to so we need an economy that is safe.

“What we are seeing in both manifestos [Sinn Féin’s and Fianna Fáil’s] are proposals that will undermine that,” he said.

Coronavirus: Universities plan to limit student access to campuses 01:14
Covid-19: Two-week quarantine period for arrivals into State could be lifted for some 01:07
Coronavirus: HSA says 800 workplace inspections carried out since May 18th 01:00
No temporary increase in weekly asylum payment during pandemic 01:00
Rural Ireland ‘has nothing to fear’ from the Greens, FG councillors are told 01:00

1 All students will not return to school even if social distancing rules are relaxed – McHugh
2 Trump announces clampdown on social media companies
3 What exactly will happen in phase two of easing restrictions?
4 Emily Maitlis thanks BBC viewers for support after Cummings row
5 Miriam Lord: Taoiseach is trapped in a Zoom session from hell
Real news has value SUBSCRIBE