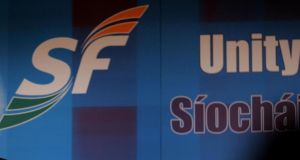 Gerry Adams has said Sinn Féin has perhaps been “too patient” in dealing with local disputes within the party.

Speaking at the Ploughing Championship in Tullamore, Co Offaly on Tuesday, Mr Adams was responding to the party’s decision to expel three councillors in Co Wicklow.

The Sinn Féin president claimed all three – Gerry O’Neill, John Snell and Oliver O’Brien – had refused to accept the authority of the party to which they belonged.

“In the Wicklow case there can be no question about any assertion other than the local councillors refused to accept the party decisions on a range of issues,” he said. “I regret the fact that we have had to expel them, but I was at the Ard Comhairle meeting when this issue came up, it has been going on for 18 months.”

The councillors had been in dispute with the party over the decision to select councillor Nicola Lawless as group leader on the council.The three had previously lost the party whip after the party said they had failed to carry out duties in the best interest of the party and refused to attend meetings of the group.

At its meeting last Saturday, the party’s ardchomhairle took the decision to formally expel the councillors. The decision took effect at 11am on Tuesday when all three were sent letters by the party.

The councillors were asked late last year to vacate their seats, but refused to do so. The three have said the party has tried to browbeat them and to impose decisions and officers on them. Mr O’Neill has previously said he would not be a “nodding dog” for any party.

Speaking on the issue of Sinn Féin’s handling of such complaints – and others, some of which involve cases of alleged bullying – Mr Adams said that “if Sinn Féin is to be blamed internally for one thing, it is perhaps we have been too patient in trying to get people to deal with issues in a fraternal way and you get to the point where you realise that that is just not possible.

“So, with great reluctance, we have expelled these three councillors, we have done it within our own rules, our own regulations and they know well that that was coming to them.”

“Like any organisation we have those, we have a zero tolerance of bullying we have a very very clear transparent procedures which are legally proved and based on best practice.”