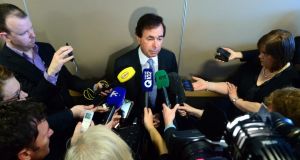 Minister for Justice Alan Shatter takes questions from the media on the Wallace controversy outside a citizenship ceremony in the Convention Centre in Dublin. Photograph: Bryan O’Brien/The Irish Times

Mr Shatter today stood over his decisions to reveal during a debate on RTÉ last week that Mr Wallace had been seen by gardaí using a mobile phone while driving. He said he learned of the incident during a briefing with members of the garda about penalty points.

Mr Wallace today said he recalled the incident taking place at Five Lamps in Dublin’s north inner city last year and that the gardaí involved had exercised discretion. He had previously denied having knowledge of it happening.

The Wexford TD said he intended to report Mr Shatter to the Standards in Public Office Commission for bringing the matter into the public domain.

The Data Protection Commissioner also said he would be willing to investigate the matter fully if he received a formal complaint from Mr Wallace about improper use of private information.

Speaking to journalists in Dublin this afternoon, Mr Shatter said “there is no question” of him using private information.

“This wasn’t private information,” he said. “I was required to get a full briefing from the gardaí on everything to do with the fixed charge issue and to my surprise, this came up. It’s no more complex than that.”

Mr Shatter said he had brought up the incident on the Prime Time programme because Mr Wallace had said no discretion should be given by gardai for those who had been levied penalty points.

“As a Minister I have an inconvenient habit of telling the truth about issues. It occasionally gets me into trouble telling the truth,” he said. “Where I think there is a public interest, to confront an issue where there is a reform needed, where people are making cases that deserve questioning. ”

Mr Wallace this morning said he was “thrown” when Mr Shatter brought up the incident. He said the Minister had previously been “damning” of independent TDs for naming in the Dáil four people who had penalty points expunged by gardaí.

“He comes along and brings me into it to suit his political ends at the time,” the Wexford TD said on RTÉ’s Today with Pat Kenny programme. “If you think that’s OK and you think that’s the way a minister should behave, I don’t think so. Am I asking Alan Shatter to resign? No, I’m not, but what I do want is…this investigated.”

Data Protection Commissioner Billy Hakwes today noted that Mr Wallace had indicated he would be making an official complaint.

Speaking at the launch of his annual report in Dublin, Mr Hawkes said he would not comment on the specifics of the case until the complaint had been made and investigated.

However, he said that in general the public sector, including ministers, had a solemn duty to protect any personal data coming into its possession and may only disclose it when it has the consent of the individual concerned or under another basis laid down in law. The legal basis for releasing data into the public domain was limited, he said.

Taoiseach Enda Kenny defended the disclosing of the information by Mr Shatter.

Asked if it was inappropriate for Mr Shatter to use information obtained as Minister for political purposes, Mr Kenny spoke about how the information was relevant in their discussion around discretion shown on the awarding of penalty points.

“You can’t have deputies saying on the one hand that there should not be anything like discretion and at the same time be the recipients of that,” he said.

Mr Kenny would not say whether the use of the information was appropriate or not.

Speaking after delivering the keynote address at a Boston College graduation ceremony today, the Taoiseach said that he was “glad that Mr Wallace has now remembered that the incident actually took place.”

Mr Kenny said that the details of the incident involving Mr Wallace obtained by Mr Shatter were “part of the background information to a very full and thorough analysis of fixed charges in respect of penalty points.”

“As part of that background briefing the Minister was made aware of this information that is relevant to the issue in question,” he said.

The Labour Party, at Government level, has refused to be drawn on the matter, with Minister for Social Protection Joan Burton saying “the Minister, I understand, is subject to a number of questions in the Dáil on the issue and I understand he will be answering those, I am sure, in due course”.

Fianna Fáil said it would consider tabling a motion of no confidence in Mr Shatter at its parliamentary party meeting tomorrow. The party’s justice spokesman Niall Collins called on the Minister to resign, citing the inappropriate use of Garda information to denigrate his opponent politically.

Mr Wallace said he thought Mr Shatter had “made it up” when he first suggested he had been warned by gardaí about using a phone while driving.

He said he had a number of issues in his head that he was hoping to raise during the televised debate on penalty point terminations and that was where his main focus was at the time. He said he did not want to get “sidetracked” by what Mr Shatter had said.

Mr Wallace said he thought about the incident subsequently and received a text from a journalist at the weekend which reminded him. “I wasn’t stopped and I wasn’t warned but I actually remember one day last year.”

He recalled two gardaí pulling up alongside him while stopped at traffic lights holding his phone. Mr Wallace said he apologised when he realised he should not have been using it, and that he made small talk with the gardaí before they pulled away. He agreed they had used discretion towards him.

Mr Wallace said he had never objected to gardaí using discretion but that Government ministers appeared keen to make it seem as if this was the case.

“He’s using this now to justify the fact that he dragged something into the public domain and I don’t ever recall a minister doing that in all the time I have followed politics.”

Mr Wallace said there should be a paper trail even if discretion is used by gardaí to handle such cases.

Put to him that some gardaí might be unhappy with him over his role in the emergence of the story about penalty points being expunged, Mr Wallace said it was never his intention to have a go at the force.

“I am having a go at a process that has been abused. Only superintendents and inspectors can actually terminate. The rank and file gardaí around Ireland have not been terminating these. We said nothing about the vast majority of gardai who have done their job.

“We’re addressing an abuse of the system by senior gardaí and we wanted a public inquiry to get to the truth of what went on.”