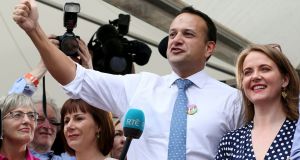 Taoiseach Leo Varadkar gestures at Dublin Castle shortly before the official result of the abortion referendum is announced on Saturday. Photograph: Getty Images

Taoiseach Leo Varadkar’s constituency of Dublin West recorded a 74 per cent vote in favour of Repeal.

The constituency consists mostly of suburbs such as Blanchardstown, Castleknock, Carpenterstown, Clonsilla and Ongar and has a young and rapidly growing population.

The highest returns were in the suburb of Hartstown where one box had an 82 per cent vote in favour of Repeal.

Taoiseach Leo Varadkar said he was pleased that some 75 per cent of Fine Gael supporters in the constituency had voted to Repeal the Eighth.

Tallies in his own polling station at Laurel Lodge in Castleknock reflected the rest of the constituency and returned a 74 per cent vote in favour of repeal.

Speaking at the count centre Mr Varadkar said “what we have seen today really is a culmination of a quiet revolution that’s been taking place in Ireland for the past 10 or 20 years”.

Maria Bailey announces she will not stand for re-election