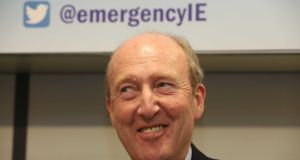 Minister For Transport Shane Ross: “It was just an idea.” Photograph: Sam Boal/RollingNews.ie

The mooted peace mission by some members of the Independent Alliance to North Korea has been definitively cancelled by Minister for Transport Shane Ross.

Mr Ross last night said that the controversial mission by him, as well as junior ministers Finian McGrath and John Halligan, will not go ahead. “It’s off,” he said.

The move had caused unprecedented tensions within the five member alliance, with the other two members, Sean Canney and Kevin “Boxer” Moran, believing it left them open to ridicule.

Mr Halligan, who is in Thailand on Government business, has also been in controversy over a Workplace Relations Commission award of €7,500 to a woman who the Minister questioned about the number of her children during a job interview.

The other four members of the alliance held a clear-the-air meeting after a week of controversy yesterday.

Mr Ross was asked earlier this week if he will actually travel to North Korea and said he would not go against Government policy, but he went further last night when pressed on RTÉ’s Prime Time.

He said that in Opposition “many years ago” the three Ministers had spoken regularly about making trips abroad and doing things that were constructive. “It was just an idea.”

“We never had it in a structured plan to do it. It was a project we talked about, that is all that it was. It had never developed to a stage where we were going.”