SF says election is ‘not about giving DUP a bloody nose’

Minister for Foreign Affairs Charlie Flanagan has said that Northern Ireland is now 'much closer' to a snap election following the resignation of Deputy First Minister Martin McGuinness. Video: Reuters 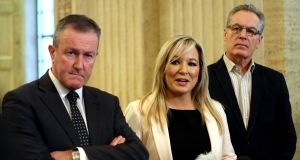 Sinn Féin’s call for an election is “not about giving the DUP a bloody nose”, Northern Ireland’s health minister Michelle O’Neill said.

The Sinn Féin minister was speaking out after the party rebuffed efforts by the British and Irish governments to devise a compromise that would prevent the collapse of the Stormont institutions and avoid Assembly elections.

Despite an intervention by Taoiseach Enda Kenny and talks held at Stormont by Minister for Foreign Affairs Charlie Flanagan and Northern Secretary James Brokenshire, Sinn Féin remains insistent that Assembly elections must be held.

Ms O’Neill, who was part of the Sinn Féin talks delegation that met Mr Flanagan and Mr Brokenshire, said elections were vital following the Renewable Heat Incentive (RHI) debacle that could cost the Northern taxpayer up to £490 million.

Sinn Féin has not deviated from its position that it will not nominate anyone to replace Martin McGuinness, who resigned as deputy first minister on Monday over Ms Foster’s handling of the “cash for ash”.

Ms O’Neill said now was the time to move to an election.

“This is about giving the electorate a say. People are angry, they need to have their say,” she told RTÉ’s Morning Ireland.

However, Ms O’Neill said after the election Sinn Féin “will not go back to doing the exact same thing as last week”.

She said they could not go back to a situation of tolerating the DUP’s arrogance towards women, the LGBT community and the Irish language.

When asked, she said that yes, the Irish language would be front and centre in the election campaign.

“It is about looking after every body.”

The deadline for Sinn Féin nominating a replacement for Mr McGuinness is 5pm on Monday.

Earlier on Thursday, the DUP Minister for Communities Paul Givan reversed his pre-Christmas decision to withdraw a £50,000 grant to promote the Irish language promotion – a move Sinn Féin had cited as being influential in Mr McGuinness’s resignation.