Second-highest childcare costs in the world would be subsidised by State, party proposes 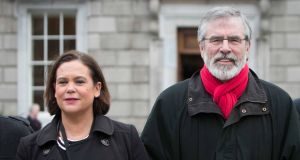 Sinn Féin’s deputy leader Mary Lou McDonald and the party’s president Gerry Adams: A commitment will be made to extend maternity benefit by six weeks at a cost of €63 million a year. Photograph: Gareth Chaney Collins

Sinn Féin intends to set maximum fees for childcare costs of €180 a week if elected to government.

The party will announce its policy on childcare today and will commit to extending maternity leave by six weeks and introducing parental leave of 12 months.

It will commit to dedicated incremental funding increases over the lifetime of a government.

The most significant proposal is an attempt to control childcare costs which are the most expensive in the European Union. The party would set maximum fees for childcare costs of €180 a week and would incrementally reduce that to €150 a week. This would be paid for by increased capitation payments from the State.

The party’s proposals, which will be set out by deputy leader Mary Lou McDonald, will commit to the extension of maternity benefit by six weeks at a cost of €63 million a year. The benefit will be extended to 52 weeks and allow for the time after 26 weeks to be split between parents.

The party will also make a commitment to increase the rate of maternity benefit over a longer term in government.

The party would remove the burden of commercial rates from all childcare centres. They would recognise all childcare facilities as educational establishments which would ensure they are exempt from paying rates.

For those who work in the sector, the party would initiate a review of the salaries involved and would move to introduce scales from 2017 onwards. It also proposes the introduction of rights and standards for childcare workers.

Dublin man found guilty of his father’s manslaughter 13:05
Fianna Fáil ‘will hold back €1.2bn’ of €11bn available to next government 12:57
Labour vows to slash the cost of childcare by up to two thirds 12:56
Case over pregnant woman kept on life support settled for €1.5m 12:54
RTÉ rejects calls for leaders’ TV debate on climate change 12:35
SUBSCRIBER ONLY