State is still learning about infrastructure costings. Hospital is dear but valuable lesson 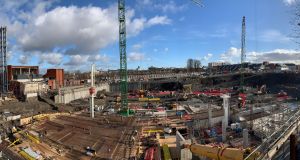 Construction site of the national children’s hospital: its costs are soaring but the Government appears to learn from such mistakes. Photograph: Tom Honan

Whatever happens now, the new national children’s hospital will cost the State a fortune, vastly more than anyone thought when they were making decisions to proceed with it, but it is small change compared with the capital spending to come over the next decade.

After the years of austerity, the State is now intent on spending €116 billion on the sinews of the country: its roads and railways, its hospitals and homes, its water supply and electricity grids.

So how will the Government avoid pouring money down the drain? And will the mistakes of the national children’s hospital be repeated – but on a vastly bigger scale?

The St James’s project will be studied by officials to learn how to avoid repeating the costly mistakes made. The lessons are there, by the score.

Speaking privately to The Irish Times this week about the hospital debacle as Minister for Health Simon Harris endured opprobrium in the Dáil, one mandarin described it as “unbelievable”, before correcting himself. “No, it is believable. That’s the problem.”

Battered and bruised but still standing after weeks of media, political and parliamentary assault, Harris told TDs on Wednesday night: “It is clear we were badly let down here somewhere and we need the PwC report to identify where we were let down.”

Builder turned Independent TD for Wexford Mick Wallace demonstrated in the Dáil debates this week that he is one of the few people in Leinster House who actually understands the mechanics of construction contracts.

“If we continue with this procurement and this contract process, this project will not be built for €1.7 billion nor will it be built for an extra €500 million. I guarantee that the costs will not stop at €2.2 billion because this process is tailor-made for Bam to reef us,” he hollered. “It will rob us blind with this form of an arrangement.”

The leas ceann comhairle rushed to shut him up; singling out companies who are not there to defend themselves is officially frowned upon, though that doesn’t seem to stop anyone.

Anyway, Wallace’s warning words were already on the Dáil record. It was noticeable that neither of the two Ministers answering questions, Harris and Minister for Finance Paschal Donohoe, rushed to Bam’s defence.

Capital spending – investing in roads, schools and other public infrastructure – was the first thing to be monstered during the years of the economic crisis. By 2008, annual capital budgets had risen to €8 billion a year.

But with an unprecedented squeeze on public spending, plans and projects were long-fingered or cancelled wholesale. Capital budgets collapsed to €3 billion a year.

Since the recovery began, budgets have grown again and last year, the Government launched its much-trumpeted Project Ireland 2040 national development plan, pledging to spend €116 billion over the next decade.

Capital spending is up a whopping 25 per cent this year – 40 projects with a budget of €100 million or more will see sods turned this year.

The ongoing controversy of the national children’s hospital has focused public, political and bureaucratic attention on the need for careful management of large public building projects.

The hospital is currently expected to cost €1.7 billion – an increase of a billion euro or so since it was first approved by Government. But as Donohoe implicitly conceded this week, that number could rise further. He will await the assessment of the new chairman of the project, he said. How did it happen?

“It’s the big, one-off, bespoke projects that present the difficulties,” says one high-level Government source who has been briefed in detail on the children’s hospital imbroglio. There wasn’t a playbook for the children’s hospital, a template from other projects. Confronted by an issue, the natural reaction of the Civil Service is to ask: what did we do last time? But with the children’s hospital, there was no last time. The source doesn’t say it, but there’s a strong sense that lots of people were making it up as they went along. So nobody really knew how to get to grips with cost control.

But this is not, actually, typical of public capital projects. There are several examples of high-profile projects overrunning on costs, of course. But what appears to happen is that the State learns from its mistakes.

Within the Civil Service, several sources pointed to the example of the roads programme over the last 20 years. When the resources for large-scale annual capital budgets became available in the 1990s, one of the first priorities was the country’s dilapidated and historically underinvested roads network. Bypasses, dual carriageways and motorways were the order of the day. But some of the early projects went miles over budget. Gradually, the lessons were learned. Now roads projects cost about €10 million per kilometre, no matter where they are. They all come in on or under budget.

“We learned a lot of lessons on the roads,” agrees one senior civil servant, authorised to speak about capital budgets to The Irish Times. “Roads, pretty much all public transport, water projects – they all come in usually on budget and on time now. The challenge is to bring that to the rest of the capital budget.”

The department supplies a long list of recent projects that have come in on or under budget – some dramatically so. All are road, water or public transport projects.

Overruns in the past, the official adds “inform so much of what we do now. We’ve utterly professionalised the delivery of these things. It doesn’t bear any resemblance to what it was like a generation ago.”

That means, of course, that new types of projects present dangers, even if this should be foreseeable. The children’s hospital was one such. But there are others: the national broadband plan, due to be decided on by Government in the coming weeks, is one. The proposed Celtic interconnector between Ireland and France is another. The plan to bring water from the Shannon to Dublin. The Dublin Metro.

Because of the fondness of politicians for announcing public investment in new projects, it’s easy to get the impression that once politicians decide, the building gets started. In fact, there is a complex and multistaged process which hums along in the background before any public money is committed, or any sods turned.

Recently, following an International Monetary Fund review which found the process for capital investment was broadly sound, but needed a few tweaks, officials have designed a revised process which will see major capital projects reviewed at regular stages. At each stage, its merits will be reviewed and a decision made only to proceed to the next stage. Crucially, the money already spent will be disregarded in the decision-making process. Projects won’t be continued just because vast sums have been spent already – they will only proceed if there is a continued justification for them.

That’s the theory, anyway. In practice, it would be a very difficult political decision to abandon a major project halfway through. But the new procedures will give the politicians the ammunition to do so, if they wish.

None of this will make the children’s hospital any cheaper. But it will make future hospital projects cheaper, it is hoped.

Officials hope that the greater availability of information about projects throughout the process will also enable more realistic tendering. “There’ll be no commitment to a project until we know all about it,” says one source. On lots of projects, officials have only a “ball-park” figure of what it should cost. “We need to get better at the ball-park figure,” one official concedes.

There is an understandable focus on major construction projects because of the huge sums involved. But people who pitch for government business in a variety of areas often complain privately about the tendering process.

One business owner who regularly tenders for State work says that “lowballing” on tenders is “happening every week”.

“There are companies in every sector who do it,” he says.

“Usually 40 per cent of the scoring is on price. So the lad next door put in a bid that was a tenner less than mine, but he can’t tie his shoelaces: doesn’t matter, he’ll get the gig,” he says.

“A lot of the time the evaluations on the tenders is being made by people who don’t have the specialist knowledge in the area – they’re ‘computer says no’ people,” he adds.

This is undoubtedly a jaundiced view. But it is echoed, in perhaps less abrasive terms by several other people who often tender for State contracts. One person who runs a major construction company says he sees it all the time.

This puts officials in a difficult position. They are wary of selecting a winning tender that isn’t the cheapest option. Says one serving official: “They don’t want to end up defending themselves before the Public Accounts Committee. ”

Improving administrative procedures and project oversight will only go so far, though. The ultimate decision-makers are elected politicians, and politicians love announcing things. Look at all those brass plates and foundation stones, immortalising the minister who happened to be in office when the project was opened – usually conceived, approved and funded by someone else.

In a book that examined repeated big-project blunders in the UK, academics Anthony King and Ivor Crewe argued that politicians’ desire to be seen as men and women who deliver – action heroes whose bold vision and bravery leads to results while others dither – results in a lack of planning, deliberation and oversight. Officials and civil servants, after all, work for politicians. The book is called The Blunders of our Governments.

1 Coronavirus: One more death in Republic as expert warns house parties are ‘disaster’ for containment
2 George Floyd death: Man shot and killed by law enforcement in Kentucky
3 Six counties free of new cases of Covid-19 over past week
4 Schools may reopen in July for children with special needs
5 Diver (35) suffers spinal injuries after hitting rocks in Co Cork
Real news has value SUBSCRIBE