Seanad to be retained after Government loses referendum 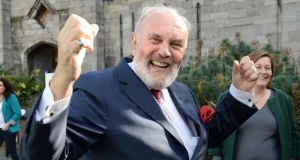 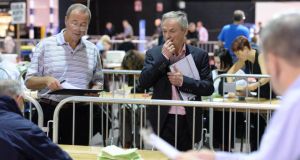 Counting of votes under way for the two referendums at the Dublin city count centre in the RDS Dublin. Photographer: Dara Mac Dónaill/The Irish Times 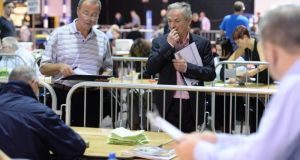 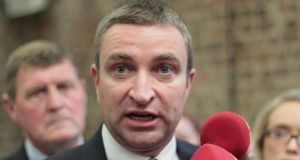 Fianna Fail director of elections Niall Collins talks to reporters at Dublin Castle as counting of votes in the referendums on the future of the Seanad and the establishment of a new Court of Appeal coninues. Photograph: PA 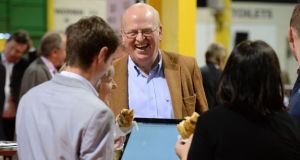 Michael McDowell, who has campaigned for a No vote, in the RDS count centre. Photograph: Dara Mac Dónaill / The Irish Times

The referendum on the abolition of the Seanad has been defeated by 42,500 votes.

Some 51.8 per cent of the electorate has rejected the proposition to scrap the Upper House with 48.2 per cent voting in favour.

Speaking at Dublin Castle this evening Taoiseach Enda Kenny said he was “personally disappointed” at the defeat of the Seanad abolition referendum but accepted the result.

Some 14,355 votes were described as invalid. The total turnout was 39.17 per cent of the electorate.

Mr Kenny said he had pledged to put the issue of the Seanad to the public four years ago and he had made good on his word.

The strongest Yes margin has been in Mr Kenny’s constituency of Mayo which voted 57 per cent Yes and 43 per cent No.

In contrast, Dublin South East rejected the amendment by the largest majority, with 61.3 per cent voting No and 38.67 per cent Yes.

A final result on yesterday’s other referendum to establish a new Court of Civil Appeal has yet to be announced, though there is an expectation among all parties that it will be approved.

Fine Gael’s deputy campaign director Regina Doherty said she was surprised polls had shown the Yes side was going to win in recent weeks.

“At the end of the day I am a democrat and the people who have voted, the people who are genuinely interested, have decided they want to keep the Seanad,” she said.

Ms Doherty said the party would sit down next week and see what went right and wrong and that some had told her they did not understand exactly what they were voting on.

“We need to look at how we deliver information, how we debate information and it is time for a real debate on setting an electoral commission and a fully established referendum commission. There are a lot of things to think about next week.”

Fianna Fáil campaign director Niall Collins said the party, the only one in the Oireachtas campaigning for a No vote, said people began to engage more seriously as polling day approached.

“We put forward coherent arguments that effectively demolished what Fine Gael and Sinn Fein were saying,” he said. “We looked at the dishonesty in terms of the €20 million [saving], the populist position in terms of getting rid of politicians without having any coherent alternative.”

Mr Collins said nobody was arguing for the status quo when it came to the Seanad and that regardless of which side won out, “political reform has to be at the top of the agenda”.

He said the Taoiseach’s failure to come out and debate what was his “pet project” had an influence on voters.

Mr Collins said it was notable that “the man who spearheaded” the campaign had refused to engage in debate and that his “dismissive attitude” in saying he would embarrass other leaders was not helpful.

The director of Labour’s campaign, Minister of State Alex White, said it would not be a question of disappointment if the Government parties lost out.

“It’s a question of the people who own the constitution making a call about their own democratic institutions. The Government parties campaigned in favour of this, so did Sinn Fein, there was an opposition campaign too and people had to decide based on the arguments they heard.”

He said party allegiance was not the main thing when it came to Constitutional referendums. “Long may that continue,” he said.

Former Fine Gael senator Fidelma Healy Eames, who campaigned for a No vote, said the low turnout in Dublin has to be looked at and that voter apathy appeared to be huge.

Earlier today, Green Party leader Eamon Ryan said he was “thrilled” at the indications that the No side would perform well and said “the Irish people have shown once again that this is the Constitution and they will hold onto it.”

He called for meaningful reform of the Seanad and the drawing up of a new format for electing members to the Upper House.

Four stillbirths among women with Covid-19 prompt alert to maternity staff on precautionary basis 18:27
Man shot in Limerick 10 years ago jailed over gun found after car chase 18:25
Covid-19: Face masks should not be compulsory for primary school pupils, Hiqa says 18:10
People with mental illness should be treated close to home, says health body 17:59
Experts disclose secret to fantasy football’s best . . . and the rest 17:45