Seanad reform to be implemented by October 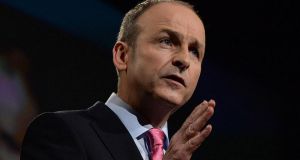 Fianna Fáil leader Micheál Martin: “This is just another opportunity wasted and another disappointment for those who want change.” Photograph: Cyril Byrne / THE IRISH TIMES

Significant changes in the way the Seanad operates will be implemented by October, according to the leader of the House, Senator Maurice Cummins.

Senator Cummins said the reforms were an attempt to improve the workings of the Seanad within the existing constitutional framework and give it a greater role in matters such as EU scrutiny and North-South co-operation.

“These Seanad reforms, which are part of the Government’s overall reform agenda, are designed to ensure a more efficient and effective Upper House, improving the way we do business and increasing output,” he said.

There will be a particular emphasis on all Ireland issues with the Seanad reviewing the work of the North South Ministerial Council and the British Irish Council.

The relevant Minister will make a statement to the Seanad after attending these regular meetings.

The Upper House will also review the work of the North South implementation bodies.

In a move designed to bring parliament closer to the citizen the Seanad will continue the work of its Public Consultation Committee. It will also continue to invite high profile individuals to address the House and inform and advise on particular areas of expertise.

In future the Government will outline its legislative priorities for the year ahead in the Seanad in the same manner it does in the Dáil. The Seanad will also be able to review reports of Oireachtas Committees and make recommendations to relevant Ministers.

On EU matters the Seanad will debate the European Commission’s annual work programme and review reports from Oireachtas Committees on EU policy proposals.

The daily order of business in the Seanad will be rescheduled to avoid clashes with Oireachtas committee sittings and the existing system of adjournments debates will be replaced by commencement debates.

“This will allow senators to raise issues with Ministers earlier in the day and represents a more effective use of the time of the House and Ministers,” said Senator Cummins.

He expressed the hope that the necessary amendments to Standing Orders will be in place by the end of September allowing the reforms to commence by October 1st.

Dismissing the proposals Mr Martin attacked the Government for not addressing the method by which senators are elected.

“Once again, the Government has just failed to understand the issue of Seanad Reform. When the country demanded real reform in the recent referendum, they were not talking about renaming debates or tinkering with the schedule of the Seanad. They were demanding change in how Senators are elected and demanding fundamental change in how we conduct the business of politics in Leinster House,” he said.