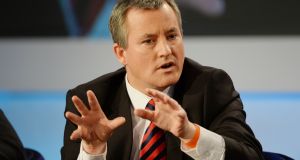 Newly elected Fine Gael Senator Kieran O’Donnell: ‘My objective is to represent the people of Limerick and to regain my Dáil seat at the next election.’ Photograph: Alan Betson/The Irish Times.

Two Fine Gael politicians who lost their Dáil seats in the general election have been elected to the Seanad.

Ms Clifford-Lee is a north Dublin solicitor Lorraine Clifford-Lee who ran in the Dublin Fingal constituency in the general election, and Mr Swanick, a Mayo Councillor and GP, previously who ran in the Roscommon-South Leitrim Dáil byelection, which was won by Independent Michael Fitzmaurice.

Mr Warfield, a musician and LGBT campaigner, topped the poll and was elected on the first count.

Independent councillor Joe Conway was in contention right to the end but fell short in the closely fought contest on the 24-candidate panel.

The Cultural and Educational panel was seen as the most difficult of the five vocational panels for Independents and Mr Conway’s performance was said to augurs well for non-party contestants for the remaining panels.

A former Limerick TD and member of the Oireachtas banking inquiry, Mr O’Donnell said he was delighted to be elected to the Seanad. He said after a “long, hard election I am happy to continue in full-time politics.

“My objective is to represent the people of Limerick and to regain my Dáil seat at the next election.”

Mr O’Donnell was elected after outgoing Fine Gael Senator Jim D’Arcy was eliminated from the race and an equal portion of his votes went to both Mr O’Donnell and Ms McFadden, who was formally elected after 1.30 am on Tuesday.

She said she was honoured to be elected to Seanad Eireann. “I did it myself. It’s nice that I was in the Dáil where Nicky (her late sister, the Longford-Westmeath TD who died in 2014) was and I’m in the Seanad where Nicky also was. I’m delighted.”

Mr Warfield, a councillor since 2014 in the Templeogue/ Terenure ward of South Dublin County Council, said he was “delighted and relieved” at his election.

“It is a real opportunity for young voices in Seanad Éireann and a voice for the LGBT community, and particularly for transgender people who have been left behind in more recent developments.”

A guitarist and singer of Irish and folk music, he previously worked full time as a musician, and played with the Wolfe Tones when his cousin Derek Warfield played with the group. The new Senator said he would also be a voice in the arts for the Seanad.

Sinn Féin expects to have seven senators in the 25th Seanad when voting is completed this week on the five vocational panels of the Upper House – an increase of five seats.

Counting begins on Tuesday for the two university panels, NUI and Trinity, whose graduates will elect six senators, three on each panel.

The NUI panel has 30 candidates, the largest in the history of the Seanad.

No woman has been elected to the NUI panel since 1981, when Fine Gael’s Gemma Hussey succeeded.

In the Seanad vocational panel counts, the votes are multiplied by 1,000 to simplify the counting somewhat and avoid having to count fractions of votes because of the small electorate of 1,155.

These are the 158 new TDs, 53 of the 60 outgoing Senators (seven were elected to the Dáil) and 941 city and county councillors.

Each of the electorate has a vote on each of the vocational panels to elect 43 senators to the €65,000 plus expenses positions.

Thirteen former TDs who lost their Dáil seats in the general election are contesting.

Fianna Fáil is likely to take between 17 and 19 seats while, Labour will at most win three seats, the Independents are likely to take four, and Fine Gael between 12 and 13 on the vocational panels.