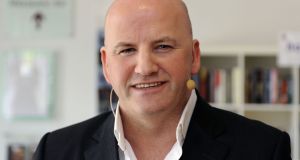 Sean Gallagher, in his letter, said councillors from 22 local authorities had been in touch with him to confirm they would be considering the presidential election nomination process at their September meetings. File photograph: Dave Meehan

Seán Gallagher has written to every local authority in the State expressing disappointment at the announcement by Independent Senator Gerard Craughwell that he will not run in the forthcoming presidential election.

He has not yet stated whether he will run against President Michael D Higgins in the election expected in the autumn and his letter, emailed to the mayors and chairs of all local authorities on Monday evening, does not request that the councils nominate him.

In the letter, he said councillors from 22 local authorities had been in touch with him to confirm they would be considering the presidential election nomination process at their September meetings.

“This is great news for democracy and is entirely consistent with article 12.2.1 of Bunreacht na hÉireann which states that ‘the President shall be elected by direct vote of the people’,” Mr Gallagher wrote.

Mr Craughwell pulled out of the presidential election race on Monday saying he could not afford the campaign.

Mr Gallagher said the announcement was “disappointing” and that Mr Craughwell had “done the State a great service” by ensuring that a public debate take place about the “need for an election at this time”.

“As I said repeatedly in the course of the 2011 presidential election, it is important for everyone in public life to do what they can to facilitate more candidates being encouraged to participate in the election process so as to more fully reflect the diverse and changing Ireland we live in,” he said.

Mr Gallagher said he believed councillors were the “closest link” to the electorate. “You live in a world outside of the bubble that exists in Leinster House and the media gaggle that surrounds it and your right to nominate a presidential election candidate should be independent of the narrow interests of any individual, group or political party,” he added.

Mr Gallagher said he wished to “dispel the suggestion by some aspects of the national media that my intervention in seeking to encourage as many councils as is possible to open up the nomination process was designed to benefit a prospective candidate”.

“This is incorrect and devoid of any basis in fact,” he said.

Mr Gallagher topped two polls in the weekend before the 2011 presidential election before a controversy during a live RTÉ debate involving a tweet purporting to come from a Twitter account connected to the late Sinn Féin politician Martin McGuinness, who was also running.

Last year he received “substantial” damages and an apology from RTÉ under a settlement of his action against the broadcaster.

Mr Craughwell said on Monday he had decided to seek a nomination last year as he “watched clouds gather in Leinster House where the political elite had decided that the incumbent President Michael D Higgins - who has been an excellent president - would get a second term unchallenged.

“ I felt that was undemocratic.”