At 32, Derry-born successor to John Hume and Mark Durkan is charged with his party’s resurrection 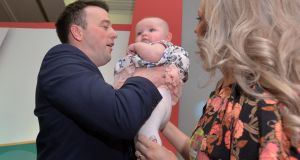 Colum Eastwood with his daughter Rosa and wife Rachel after he won the SDLP leadership contest. Photograph: Pacemaker Press

Colum Eastwood has a five-months-old baby called Rosa. His wife’s name is Rachael Parkes. Given that he now leads Northern Ireland’s SDLP, a party born out of the civil rights movement, the choice of name was, perhaps, inevitable.

Eastwood was born nearly 30 years after Rosa Parks became the “first lady” of the American civil rights movement by refusing to give up her seat for a white passenger. Now 32, he is one of the youngest members of the Stormont Assembly, and the third SDLP leader to come from Derry, following in the footsteps of John Hume and Mark Durkan.

However, his challenge – the political resurrection of a party that has struggled in the face of competition from Sinn Féin – is a difficult one.

The Eastwoods are a busy family. His wife runs a pub in Derry city centre and when not behind the bar, she is a soul singer. “I met her in a pub; we were going together for maybe 10 years and engaged for a couple of years. We’re married two years,” he says, though the personal details are dragged out of him.

He was born in Derry in 1983, the son of two teachers: Paul, who is retired from St Joseph’s College in the Creggan, and Deirdre, who still teaches at St John’s Primary School, also in the Creggan. His brother Liam is involved in the fashion industry in London; his sister Nora works in public relations in Dublin, while his youngest brother, Peter, recently completed a degree at the Glasgow School of Art.

He is the most political of the family, joining the SDLP when he was just 14, having spent, as he says, “a lot of time in and out of John Hume’s office” in Derry at a time when the city was convulsed every August by violence surrounding the Apprentice Boys parade.

“I remember one time standing at the Diamond in Derry watching the Apprentice Boys march and John saying to me, ‘If we can’t accommodate this in Derry how can we ever accommodate unionism within a united Ireland?’

Eastwood is one of a new generation of Northern Ireland political leaders, a post-Troubles generation. He started second-level school in St Columb’s College on the day after the first IRA ceasefire of August 31st, 1994.

St Columb’s fostered John Hume, Seamus Heaney, Brian Friel, Seamus Deane and Eamonn McCann. “Heaney and Friel came in to talk to us from time to time. They were very political without being overtly political; they gave voice to difficult issues.”

Knowledge of Hume’s decline because of dementia saddens, there is sadness, too, that Hume and his wife, Pat did not have a better opportunity to retire and enjoy life.

“John was always a single-minded person, he had a goal and he achieved it. There are thousands of people alive today because of him – that is a pretty good achievement.

“People in Derry look out for John, they look after him.”

He went to Liverpool University to take Latin American studies, a rather revolutionary subject of the time: “I spent too much time sitting on roads protesting against the Iraq War than I did sitting in the lectures. I did not finish,” he admits.

But nothing is wasted: “The experience of working that campaign was very beneficial because everybody in Liverpool at the time and right across Britain and Ireland were outraged by Tony Blair’s Middle Eastern adventure. We wanted to stand up against it. It is only now 12 years later that another British government has the nerve to have another misadventure in the Middle East. That campaign in 2003 was important in stopping subsequent potential wars.”

Returning to Derry, he became more involved in SDLP politics, soon elected to Derry City Council. By 27 he was the youngest mayor of Derry. He was elected to the Assembly in 2011.

He took over the party leadership from Dr Alasdair McDonnell in November in just his first term at Stormont. It was a relatively good-mannered and bloodless contest in a party that is notorious for internecine feuding.

Eastwood has been involved in only one real controversy. In 2012 he attended the funeral and carried the coffin at the paramilitary-style funeral of his friend Séamus Coyle, who was associated with both the Irish National Liberation Army and the Official IRA.

“Séamus Coyle was a friend of mine; we became very close. Séamus was somebody who was on a political and personal journey,” says Eastwood, “He did not end up as deputy first minister.”

Of the dissidents generally he says, “If they call themselves republicans they have to listen to the will of the Irish people and I will never stop telling them that, and I hope that they start to listen to me.”

Derry remains more an SDLP than a Sinn Féin city, but Sinn Féin may be catching up. Was there never a time as a young teenager that he found Sinn Féin more attractive?

“I was looking at it very logically,” says Eastwood. “The SDLP are the most successful political party in Irish history. They are the people who dragged Sinn Féin to the negotiating table. They brought about peace, power sharing, equality – all without needing to fire a shot.

“So, when you are making these decisions, you make them on the basis of who has been right, who has been right all along, whose analysis is correct, which party was able to achieve their aims. No matter how much people try to revise history it was the SDLP that made the fundamental reshaping of Irish politics. So, it was an easy choice.”

But what is the point of being right if you have 14 Assembly seats and Sinn Féin has 29? Eastwood knows full well that the SDLP psychologically is at a low ebb.

It is a long way from when John Hume and Séamus Mallon were in charge and the party was top nationalist dog with 24 seats against 18 for Sinn Féin. There is a real danger the SDLP could drop more seats in the Assembly elections in May bringing it close to the standing of Alliance.

“We have to be honest. We have slipped,” he says. “But I think politics has been poorer for our slip.

“I think the political process in the past 15-17 years has been aided and abetted by successive British governments isolating the middle to bring in the extremes. So you have a power sharing structure, but not in spirit,” he adds.

“People probably have had enough of the historic gestures, of the constant cycle of peace-processing and negotiating. They want to see delivery. There is an opportunity for normal politics to come to the fore and for us to move beyond that generation with that baggage.”

“The one that is in charge at the moment.”

He says as leader he wants to promote a policy of “progressive nationalism”, adding, “I am very much an Irish nationalist. I believe very strongly in a united Ireland. I think it is the best idea around and I work towards it every day.”

A young man, does he expect to see a united Ireland in his lifetime? “I don’t know,” he says. Then he corrects himself, “I think I will. But we have to understand that right now it is so far down people’s agenda they are not that interested in it. They are interested in the economy and the health service.”

Eastwood gave an inspiring speech on the day he was elected in November but he has been fairly quiet since. He says he has been settling into his job, planning for the election, attempting to beef up the internal organisation and trying to chart a future for the SDLP.

While his predecessor Dr McDonnell concentrated on organisation, Eastwood says both organisation and motivating leadership are required. He says the “vision thing” is important and that in the new year and ahead of the Assembly elections he will start making his presence felt.

Nationalists must persuade unionism of the value of unification. “We won’t persuade them tomorrow. I think some people said it would be done by 2016. I think they were wrong about that. It is not going to be done in a dogmatic way by waving flags at each other.”

The best way to a united Ireland is to make Northern Ireland work, Eastwood says. “We have to do the practical groundwork towards it. My view is that the British will never leave and the Irish will never take us if we are an economic basket-case. I think that is what we are. I don’t think we have anything to fear from making this place prosperous and more fair.”