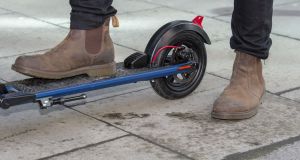 The Road Safety Authority says anecdotal evidence suggests e-scooter-related injuries “are generally minor and a result of users falling off rather than interactions with other road users”. Photograph: Dave Meehan

A report commissioned by the Government on how electronic scooters could be regulated and safely used on Irish roads has pointed to widespread lack of regulations and enforcement in other countries, and limited data on the potential for serious injury.

The report, commissioned by the Road Safety Authority, has recommended “powered transporters” such as e-scooters and Segways should be allowed for, under certain regulations.

However, it has also cautioned that a controlled and considered rollout should be employed to ensure safety standards are upheld.

The report was commissioned by the Road Safety Authority at the request of Minister for Transport Shane Ross. The desk-based research was conducted by TRL, a UK-based consultancy.

The report points to a dearth of authoritative data on the safety aspects of e-scooters. It refers to studies conducted in Korea, Canada (on hoverboards), China, Saudi Arabia, and the US (Portland), where a pilot scheme was conducted for a year.

It claims that anecdotal evidence suggests that scooter-related injuries “increase with increased scooter use but that these are generally minor and a result of users falling off rather than interactions with other road users”.

The report emphasises many of the positive aspects of these new forms of vehicle, known as “powered transporters”. They include reducing reliance on cars while reducing carbon emissions and also providing a benefit to the environment.

It also warns that an outright ban would be “both counterintuitive and impractical”. “Regulation that makes the use of powered transporters illegal should be avoided, and new regulations should be designed to accommodate future device types,” it states.

It recommends broad suggestions including clear classification of each type of electronic transporter, based on safety considerations. It also says that safety gear such as helmets should be encouraged. It suggests “guidelines”, giving examples such as limiting speed on footpaths to 6km/h and banning them from high-speed roads.

It also recommends minimum safety standards for the vehicles.

The RSA-commissioned research did not extend to consideration of the design of e-scooters or of fatalities.

Some more recent studies and media reports, not included in the report, have put tentative figures on fatalities in the US. Associated Press reported in June that there had been 11 deaths in the US since the beginning of 2018.

A recent study conducted in Austin, Texas, showed 192 hospital admissions from e-scooter injuries during a three-month period in that city. Another carried out by UCLA in Los Angeles over a year showed a high percentage of head injuries among the 249 admissions to two hospitals. Both studies found that in the vast majority of cases, scooter riders had fallen off the scooters and a tiny minority were wearing helmets.

The RSA-commissioned report also surveys the laws and regulations that apply to scooters in other countries. It found that where scooters are prohibited, the laws and regulations are largely ignored. Some countries do not permit those under 14 or 16 to use e-scooters on public roads. Most put upper limits on speed, anywhere between 18km/h and 25km/h. In some states, scooters are confined to bicycle lanes or to slow-moving roads.

Mr Ross has announced a two-month consultation period on the report. It is understood the Garda Síochána has expressed serious concern about the safety implications.

Fianna Fáil spokesman on transport Mark MacSharry said he was disappointed with the level of detail in the research about the safety questions. He said there was a place for e-bikes and e-scooters but that safety considerations needed to be paramount.