Ronan Fanning: Why commemorating the Home Rule Bill would be unwise

Opinion: The 1914 Act was a fudged compromise that could never have been implemented as it was enacted 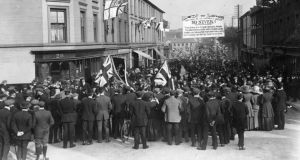 ‘The more seditious Ulster’s unionists became, the more persuasive would be the “fresh evidence” and the more likely that “public opinion” would indicate that they must receive “some special treatment”.’ Above, unionists from district Orange lodges march to the Manor House Grounds, Coleraine, in an anti-home rule demonstration in September 1912. Photograph: Topical Press Agency/Getty Images

History, as the teacher reminds the narrator in Julian Barnes’s novel, The Sense of an Ending, is more than “the lies of the victors . . . it is also the self-delusions of the defeated”.

When I quoted that passage last year in the introduction to Fatal Path, I suggested that one consequence of the revisionist debate about the Irish revolution was the legitimation of the self-delusions of those who see themselves as the heirs to the constitutional nationalists who had been so resoundingly defeated by the republican revolutionaries.

But I did not then expect we would so soon witness such a bizarre example as John Bruton’s calling on the Government to commemorate the centenary of the enactment of the Home Rule Bill on September 18th, 1914.

Again, let me emphasise, an admirable political objective in theory. But, in practice, the propagation of a bland, bloodless, bowdlerised and inaccurate hybrid of history which, if carried to extremes, is more likely to provoke political outrage than to command intellectual respect, let alone consensus.

John Bruton’s clarion call represents just such an extreme because it flies in the face of two historical realities about the third Home Rule Bill. The first is that the Bill was always an exercise in hypocrisy. Asquith’s government never intended that it should be enacted in the form in which it was introduced.

Although the Parliament Act of 1911 destroyed the House of Lords’ permanent veto on home rule, it legitimised a two-year veto. This meant that, although the Home Rule Bill was introduced in 1912, it could not be enacted before the high summer of 1914.

The arch-hypocrite at the cabinet meeting of February 6th, 1912, that decided on the terms of the Bill was the Irish chief secretary, Augustine Birrell.

Birrell saw his role as keeping sweet John Redmond and the Irish Parliamentary Party that held the balance of power in the House of Commons. This meant his publicly opposing Ulster’s exclusion from the terms of the Home Rule Bill despite his personal belief – of which he had earlier but privately advised two of his most powerful cabinet colleagues, David Lloyd George and Winston Churchill – that he anticipated civil war unless at least part of Ulster was excluded from the Bill’s terms of reference.

But political expediency demanded that Birrell conceal his convictions. So when Lloyd George, backed by Churchill, formally proposed Ulster’s exclusion to the cabinet on February 6th, 1912, Birrell spoke against it, and the procrastination of Asquith and Birrell prevailed over the pragmatism of Lloyd George and Churchill.

The cabinet’s decision that the Home Rule Bill “as introduced should apply to the whole of Ireland” meant nothing because it was hedged about by two caveats. That Redmond “should from the first be given clearly to understand that the Government held themselves free to make such changes in the Bill as fresh evidence of facts, or the pressure of British opinion, may render expedient”; and that “if, in the light of such evidence or indication of public opinion, it becomes clear as the Bill proceeds that some special treatment must be provided for the Ulster counties, the government will be ready to recognise that necessity”.

This amounted to a tacit invitation to revolution: the more seditious Ulster’s unionists became, the more persuasive would be the “fresh evidence” and the more likely that “public opinion” would indicate that they must receive “some special treatment”. The Augustinian invocation “Give me chastity but not yet” was of the same order as Asquith’s attitude to Ulster’s exclusion.

“I have always thought (and said) that, in the end, we should probably have to make some sort of bargain about Ulster as the price of home rule”, he wrote in September 1913.

“But I have never doubted, that, as a matter of tactics and policy, we were right to launch our Bill on its present lines”.

The Ulster unionists’ threat of violence duly bore fruit on March 9th, 1914, when Asquith told the House of Commons the terms of the “bargain” he had just imposed upon the hapless John Redmond: the exclusion of Ulster from the terms of the Bill for six years.

The partition of Ireland, probably unavoidable since the cabinet meeting of February 6th, 1912, thus became inevitable.

Although the compromise that put the Irish problem on ice for the duration of the Great War disguised this inevitability, it was yet another exercise in hypocrisy.

This time Redmond was complicit because the core of the compromise was his idea: that if the government would postpone the introduction of the amending Bill providing for Ulster’s exclusion, he would agree to the suspension of the coming into effect of the Bill (despite its being immediately put upon the Statute Book) until the amending Bill became law.

The enthusiasm with which John Redmond and his party greeted the announcement of the royal assent to the Government of Ireland Act in the House of Commons, on September 18th, 1914, and which John Bruton now asks us to embrace was as misplaced as the embitterment of the unionists who walked out of the House en bloc.

Mr Bruton, in short, is calling for the commemoration of a settlement that never was: the 1914 Act was a fudged compromise that could never have been implemented as it was enacted.

The deafening silence of the Government’s response at least offers hope that, even if Ministers are uninhibited by the fact that such a commemoration would be historically disreputable, they may have already realised that it would be politically unwise.