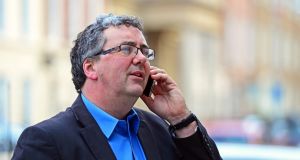 Donegal TD Thomas Pringle: ‘People always ask me when I do Leader’s Questions: what do I think of the responses? And I say I never listen to the responses because they mean nothing.’ Photograph: Eric Luke

The next time Thomas Pringle gets his turn at Leaders’ Questions, the best thing Micheál Martin can do is respond with a nice chorus of De Banks, or better still, through the medium of mime.

The Taoiseach is too well-mannered to do what most people in the same position would do: counter the question with a polite request to redirect his query to a posterior part of his anatomy because the Donegal TD won’t bother listening to the reply anyway.

The two crossed swords on Wednesday when the Independent deputy accused the Government of not seriously considering a zero Covid approach while failing to engage in meaningful discussions with the UK and Northern Ireland on a co-ordinated strategy.

Deputy Pringle has every right not to like or accept what he hears, but the least he can do as a TD is afford the Taoiseach, and the Dáil, the courtesy of listening

Since October he has been looking for details of the Government’s Covid-19 plans, writing to the Department of the Taoiseach, the HSE and the Department of Foreign Affairs seeking all records of correspondence between them and their relevant counterparts in the Northern Ireland Executive and British government.

He got a disappointing response to his Freedom of Information requests, finding little evidence of few arrangements in place with either administration. “Shockingly”, he discovered no documents on zero Covid, with a “possibility” that this strategy was overlooked. “I’m being facetious here, Taoiseach, because I’m not shocked at all.”

He thinks the Government has been “spinning” about the difficulties involved in implementing a full elimination plan when it hasn’t even discussed one.

Not so, insisted Micheál Martin. The strategy has been discussed in Government but the public health advisers counselled against. It was also debated in the Dáil but the implications weren’t “fleshed out”.

As for dealing with authorities in the North, he listed his own discussions on “alignment” with the First Minister and Deputy First Minister, contacts between the chief medical officers on both sides of the Border and ongoing North-South ministerial council meetings.

But there are no records, said Pringle. “Are these discussions taking place in a phone box, or something?” he wondered, not impressed by the lack of information in the Taoiseach’s reply. “People always ask me when I do Leaders’ Questions: what do I think of the responses? And I say I never listen to the responses because they mean nothing.”

Richard Boyd Barrett, sitting nearby, gave a little guffaw of delight at his colleague’s cheeky admission.

Thomas was clearly frustrated at the slow and grudging response to his reasonable requests tabled under Freedom of Information rules. But telling the Taoiseach (or any other representative of the people in Dáil Éireann) that he doesn’t listen to the answers he gets in parliament was very discourteous. It clearly stung, perhaps as intended.

But it also gave Micheál the chance to take the upper hand. “I am not as arrogant as you, Deputy. I would always listen to other people’s perspectives and other people’s points of view and I would respond to them. I don’t dismiss them like you do and I’m not as cynical as you in that you don’t even bother worrying about the reply or listening to the reply anymore.”

“Well then, you shouldn’t even be putting the questions,” Micheál snapped. “Okay?” Which is fair enough.

Deputy Pringle has every right not to like or accept what he hears, but the least he can do as a TD is afford the Taoiseach, and the Dáil, the courtesy of listening. Mary Lou McDonald most definitely doesn’t agree with what the Taoiseach says but, by God, she doesn’t miss a word of it.

She listened carefully to what he had to say at Tuesday’s announcement of tepid new travel restrictions requiring mandatory quarantine from a small cohort of people flying in from abroad. She duly formed an opinion.

“Absolutely crazy” but not unexpected, coming from a Government “clearly at sixes and sevens” with no idea what to do after lockdown ends on March 5th and displaying an “absence of urgency, leadership and plain common sense” with a plan which is only a “half measure” and “unenforceable”.

Government spin was 'to victimise, demonise, and put down our public houses, because of some reason that is only best known to yourself and your Government'

No. Not keen on the plan. It’s all or nothing, a universal lockdown. But “astonishingly”, Micheál has opted for a system which relies on “people’s best discretion and judgment” in isolating in their own home.

Mary Lou exhorted him to do what the people expect and lead from the front. He wasn’t surprised to get this reaction from the Sinn Féin leader.

“I expect everybody to lead from the front but, unfortunately, you’ve been on the fence for a lot of this and you’ve clung to the fence for as long as you possibly can,” only getting off it to “jump on the bandwagon when it suits”.

He dragged up a headline for her delectation from the Daily Star in September. Remember it? No? He refreshed her memory. “All the pubs should open.” Who said it? Mary Lou. Aah yes. The pubs.

Danny Healy-Rae of the Rural Independents, having used his time at Leaders’ Questions (when everyone else used theirs to interrogate the handling of the Covid crisis) to talk about resurfacing roads in Kerry, addressed the pandemic fallout at a later stage.

“The virus didn’t walk across the Irish Sea,” he declared, echoing Catherine Murphy’s earlier remarks when she called for a clampdown on travel and mandatory quarantine for people arriving from abroad. “This didn’t arrive on a southeasterly. It arrived on a flight or on a boat.”

But while the co-leader of the Social Democrats was concerned about suppressing the virus, DHR was fuming over the closure of pubs.

Now he is highly suspicious the new restrictions are a “belated attempt” by the Taoiseach to fight the real threat from abroad. “Is it a charade? Or is it only an attempt to cover up for not doing what he should have done all along? It’s very easy to close pubs down. It’s very easy to close the country down. And that’s what he’s done and ’twasn’t the virus done it.”

His brother Micheal Healy-Rae wanted to know “what set the Government has against publicans” because there was a concerted effort to blame pubs for spreading the pandemic.

A claim “proven to be grossly untrue because of the facts”. The facts, no less, and them being the virus getting out of control when the pubs were closed? And yet Government spin was “to victimise, demonise, and put down our public houses, because of some reason that is only best known to yourself and your Government”.

Micheál, looking weary to the bones, kept his composure. “I find it very difficult to comprehend what has just been said given all that has happened in this country,” he sighed. “Have you learned anything from what has transpired?” He has the patience of a saint.