Referendum due on removing blasphemy from Constitution 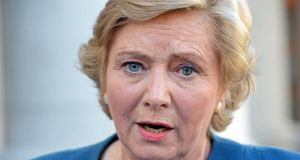 Minister for Justice Frances Fitzgerald: is to bring a memo to Cabinet today proposing that a referendum be held on the issue. Photograph: Eric Luke/The Irish Times

The Government is set to agree to hold a referendum on removing the offence of blasphemy from the Constitution, following recommendations of the constitutional convention earlier this year.

Minister for Justice Frances Fitzgerald is to bring a memo to Cabinet today proposing that a referendum be held on the issue.

While no timeframe is outlined, it is claimed the vote will be held on “an appropriate date to be decided by the Government”.

Ms Fitzgerald’s proposal, which is due to be discussed by Ministers at their weekly meeting, is to accept the convention’s recommendation of a referendum to “delete the offence of blasphemy” from the constitution.

The sixth report from the convention, submitted to the Government in January, said a “clear majority” of members of the constitutional thinktank favoured the removal of the blasphemy clause.

At the time, Mr Ahern said it was a short-term solution to avoid holding a referendum in an economic crisis.

The constitutional convention said in its report that it received “very many” submissions on blasphemy and said “there seemed to be an overwhelming support for the removal of the clause”.

“The issue is regarded by many of those who made submissions as part of a much wider debate, including the role of God and religion in the Constitution and the separation of Church and State.”

Following recommendations from the constitutional convention, the Government has already committed to holding referendums on same-sex marriage, reducing the voting age to 16 and lowering the age at which people can run for the presidency.

It is expected all three will be held next spring, probably in April, although there have been some arguments for holding the same-sex marriage referendum on its own, alongside the byelection to fill the Carlow Kilkenny Dáil seat vacated by Phil Hogan if he is made European commissioner.