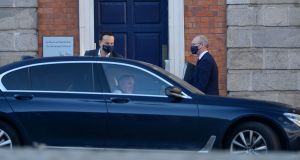 Tánaiste Leo Varadkar is due to make a statement and to be questioned in the Dáil on Tuesday in relation to the controversy over him personally providing a copy of a document about a GP pay deal to a doctors’ group led by his friend.

It emerged at the weekend Mr Varadkar passed a draft of a new contract for general practitioners negotiated between the-then government and the Irish Medical Organisation (IMO) in April last year to Dr Maitiú Ó Tuathail, who was head of the National Association of General Practitioners (NAGP).

The Fine Gael leader is due to give his statement shortly after 4pm and the Q&A session is expected to continue until around 5.40pm. Here are some of the questions he is likely to face.

Why hand over a document in such a manner?

Mr Varadkar’s defence is that he sent the document, marked as confidential, to his friend as he wanted to convince all general practitioners to buy into the new contract. He passed on the contract to Dr Ó Tuathail over a week after an agreement was reached with the IMO. Many of the details of the contract were in the public domain at that stage, and Fine Gael has made a big deal of that fact.

However, the question is why not just publish it in that case and give all GPs the option to see it rather than hand it over in a manner that could be seen as clandestine?

What was his relationship with Maitiú Ó Tuathail?

Dr Ó Tuathail is a personal friend of Mr Varadkar’s who campaigned for him in the 2017 Fine Gael leadership contest. A regular guest on radio and TV during the Covid-19 pandemic, the 31-year Connemara man is a GP based in Ranelagh.

He was president of the NAGP, a rival to the IMO, representing over 2,000 family doctors last year.

The Opposition will claim Mr Varadkar handed over the document solely on the basis of his friendship with Dr Ó Tuathail, and that this was an example of an “old boys’ network”. This claim has been strongly contested by Fine Gael, which claims Mr Varadkar’s motivation was to sell a good deal to as many GPs as possible, and not to do a favour for a friend.

However, there is likely to be further questions about other communications he had with Dr Ó Tuathail, which – on the face of it – might display a lack of discretion on the part of the Fine Gael leader.

Did Varadkar and Fine Gael succumb to NAGP threats and release the document?

It emerged on Monday that the NAGP wrote a letter to Fine Gael in February of last year threatening to campaign against the party in the local and European elections if it did not reverse its decision to exclude it from the GP contract negotiations.

The association had been set up as a rival to the IMO and had proved to be a thorn in the side previous governments, initially opposing, for example, the free GP care scheme for children aged under six.

On foot of the letter, four Fine Gael parliamentarians met a delegation from the NAGP led by Dr Ó Tuathail. The TDs (and a senator) later wrote to then minister of health Simon Harris asking for the NAGP be included in the talks. Mr Harris did not meet the NAGP, and it was not involved in the negotiations.

The Opposition will argue that Fine Gael acquiesced to NAGP threats in passing on the draft contract. Mr Varadkar’s reply will likely be that it did not, and that many groups threaten to campaign against his party.

Why did Varadkar not let Simon Harris know he was sending the document on?

Mr Varadkar is likely to say that the government had already decided on this issue so it was a whole-of-government matter rather than one specific to health. A likely response will be that as taoiseach at the time (and as a former minister for health) it was an issue of significance for him and it was therefore his prerogative to ensure the contract was understood and accepted by as many GPs as possible.

What are his views on refugees?

In one text published by Village magazine, Dr Ó Tuathail says Mr Varadkar did not give a f*** about refugees. The response is likely to be that Mr Varadkar can not account for what third parties attribute to him in texts and that what was said does not reflect his position on asylum seekers or refugees. He is also likely to refer to his own status as the son of an immigrant. One question will be if there are other communications between him and Dr Ó Tuathail that could lead to further embarrassment.

Did he break any law or ethical code?

Village claimed Mr Varadkar may have breached the Official Secrets Act 1963 or the Criminal Justice (Corruption Offences). Sinn Féin and the Labour Party are understood to have taken legal advice on this. It is understood Government is adamant that no law was broken, and Mr Varadkar has already emphasised this point.

Questions will also be asked if he broke any code of conduct for the Dáil, or any code outlined in the Ethics in Public Office Legislation. A complaint has been made to the Standards in Public Office Commission by Rise TD Paul Murphy. It will determine if there is the basis for a case. Fine Gael has argued that there is not. This question will not be settled today.

Was he responsible for any other leaks of documents, or information?

That is a big question to ask a politician. There are few who have never leaked information to the media, given finding out inside information is part of political reporting. Specifically at issue here, however, is other documents being passed onto third parties.

Did he provide NAGP with any other assistance?

We do not know. Answering this will involve a retrospective journey through Mr Varadkar’s time as minister for health and subsequently as taoiseach.