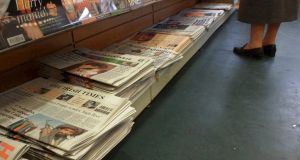 Irish newspapers and broadcast media need “prompt action” from the new government if they are to be saved, the main union representing journalists has warned.

A pledge in the programme for government to establish a commission on the future of the media is “long overdue”, the National Union of Journalists said.

However, the NUJ said it remained “concerned at the lack of urgency” shown by the outgoing Government in addressing the financial crisis currently affecting RTÉ.

NUJ general secretary Séamus Dooley said a commission on public service broadcasting established in 2019 has so far not carried out any “meaningful work”, while RTÉ has been blocked from taking major decisions to address its crisis.

“Unfortunately there is not time to wait for the report of the proposed commission. As a trade union we have a real concern for employment in the sector and for the undermining of local journalism through under-investment.”

The programme for government acknowledges that the media is facing “significant challenges” which have been “brought sharply into focus by Covid-19”, and pledges action within nine months to guarantee a “vibrant, independent public service media”.

The new government will “bring together all policy functions relating to broadcast media, print media and online media into a single media division within a government department”.

The proposed programme says: “The current funding model for public service broadcasting is inefficient and the commission will publish recommendations.”

A broadcasting Bill will be passed by “by the end of the year” to ensure support for local and regional stations, along with defamation reforms and support for Irish-language broadcasting.

“We welcome the positive tone of the programme [for government] and the recognition of the need for a diverse media sector,” said Mr Dooley. “We look forward to receiving terms of reference for the commission.”