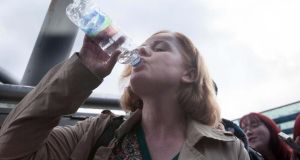 Ruth Coppinger TD after taking an abortion pill bought from Belfast after bringing back abortion pills denied to women in the Republic of Ireland at Connolly Station, Dublin. Photograph: Gareth Chaney Collins

Socialist TD Ruth Coppinger and other pro-choice activists swallowed abortion pills during a rally outside Connolly Station in Dublin after taking a train journey to Belfast to collect the medication.

Ms Coppinger said the journey was modelled on the “Contraceptive Train” of 1971, when members of the Irish Women’s Liberation Movement travelled to Northern Ireland with the intention of bringing back contraceptives which were illegal in the Republic.

“We ordered these pills online through Women on Web. We got them delivered to friends of ours [in the North]. We would like to highlight that they’re safe, that they’re an option for women given that abortion is banned,” she said.

“Most of all the message we want to deliver today is we need to get the medieval eighth amendment out of our constitution now. We need a referendum to repeal the eighth amendment to allow for abortion in this country for women who need it.”

Also participating were members of Action for Choice and the Socialist Party’s ROSA [Reproductive rights, against Oppression, Sexism & Austerity] campaign group. Women on Web is a digital community of women who have had abortions and organisations that support access to abortion.

Ms Coppinger acknowledged that some pro-choice groups had chosen not to take part. The event took place on the second anniversary of the death of Savita Halapannavar.

“A number of women have either died or suffered under the ban on abortion in this country. Savita was one and the migrant rape victim over the summer was another.

“She could have been given these pills for example very easily and saved her the trauma that she went through for months and months. Why wasn’t that done when it was available to doctors, to hospitals, et cetera?

“So what are we going to do, sit around and hold vigils? We also have to protest and demand that this law is changed. The women that took the action in 1971, they were going against the tide, they were breaking the law, we’re happy to challenge this unjust law today and to say the hypocrisy has to end. Enough is enough.”

Responding, Cathy Doherty of the Abortion Rights Campaign, which organised a candlelight vigil to mark Ms Halappanavar’s anniversary, said: “I understand the reason why they’re doing it. It has echoes of the 1970s contraceptive train. But it’s just that the Abortion Rights Campaign thought on the anniversary of Savita’s death it would be more respectful to have a vigil.”

The sale of prescription only medicines by mail order is prohibited in Ireland, including supply via the internet. When detected, abortion-inducing drugs are seized by the Irish Medicines Board and the Revenue Commissioners.

According to the Protection of Life During Pregnancy Bill to “intentionally destroy unborn human life” is an offence for which a woman is liable to imprisonment for up to 14 years.

Meanwhile, Caroline Simons of the Pro Life Campaign criticised the train protest. “This appears to be an initiative more concerned with garnering publicity for the pro-choice cause rather than a genuine regard for women’s health and wellbeing,” Ms Simons said.

“The groups involved have no regard for the humanity of the unborn child and no interest in drawing attention to the fact that abortion has significant negative mental health consequences for many women.”