Presidential age vote defeated by three to one margin 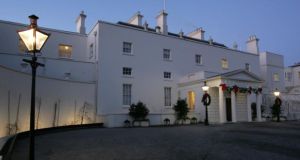 Voters have rejected the opportunity to reduce the minimum age for candidates from 35 to 21 years of age.

Taoiseach Enda Kenny has said the presidential age referendum got “sidelined” because attention was focused on the same-sex marriage poll.

The proposal to reduce the minimum age of presidential candidates from 35 to 21 was rejected by a large majority on Saturday.

The announcement was made at 9.10pm.

Mr Kenny said while there had been a great deal of discussion of the marriage referendum, the focus on the presidential age referendum had been limited.

Voters were asked if they wanted to reduce the minimum age for candidates from 35 to 21.

However, Mr Kenny said it was clear people did not want the minimum age bar to the office of President reduced and that was something the Government respected.

“I think to an extent the issue of the argument became sidelined because of the much greater topical issues that centred around marriage equality,” he said.

Tánaiste Joan Burton said the same-sex marriage referendum was a very compelling subject that gave rise to a huge amount of debate.

The other referendum had not generated anything like a similar level of interest.

“If I was asked 20 times about the age of contesting the presidency that might be a slight exaggeration, and of the 20 so people who asked me questions on it only two indicated any support,” Ms Burton said.

“And at one stage there was a mention of political pensions and I think that might have killed it off in its entirety.”

Labour made clear last month it would not take a position on the proposition, preferring to concentrate its campaigning firepower on ensuring the same-sex marriage referendum was passed.

Fine Gael and other parties backed the proposal, however.

The proposed 35th amendment to the Constitution originated at the Constitutional Convention, a forum of 100 people, representative of Irish society, with an independent chairman.

Reducing the eligibility age for the President, bringing it into line with the requirements for TDs and Senators, was just one of a large number of recommendations the Convention made.

Michael Ring, Minister of State for Tourism and Trade, said the No vote was appropriate, stressing the importance of the Presidency.

Dublin South Central TD Eric Byrne revealed he had changed his mind at last minute and voted Yes. “It just dawned on me, I don’t have to vote for a 21-year-old but why deprive them of the right to run?”

Fine Gael Minister of State Simon Harris, who is advocated a Yes vote, said the Constitution is ageist and needs to be changed.

“Ageism has no place in our Constitution,” he added. “It was written at a time when there was a different view of our younger citizens.

“If someone can run for the Dáil, if someone can be taoiseach, I don’t see why they cannot put their name forward. The arguments about a 21-year-old president are disingenuous.”

Fine Gael, Fianna Fáil and Sinn Féin supported the referendum to lower the eligibility age but did not canvass for a Yes vote.